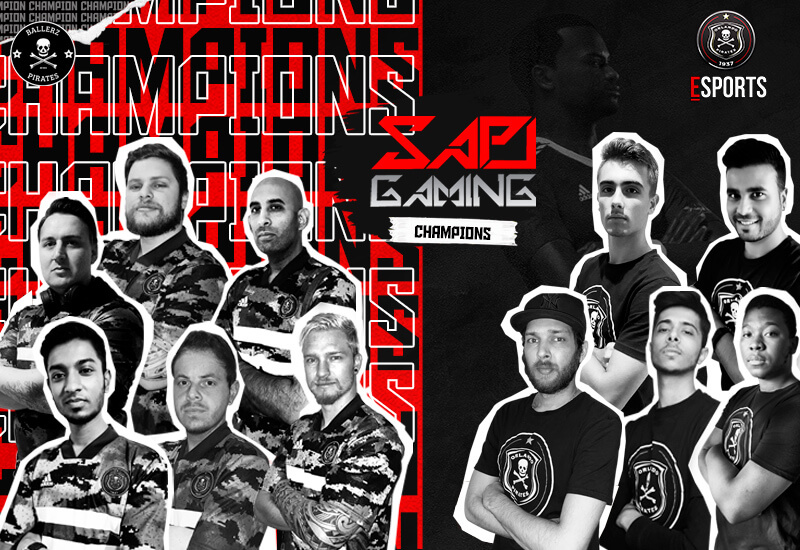 The South African Pro Clubs League Season 12 started at the end of October 2020 and was the first SAPL season for the newly launched FIFA21.

Pirates eSports together with Ballerz partnered and entered a new look team, the Ballerz x Pirates squad, to compete in the SAPL Premier League against the 16 best Pro Clubs teams in the country.

After quite a slow start to the season, the Buccaneers found themselves in 4th place after 10 matches, 2 points behind the log leaders at the time.

An impressive run of 9 wins and 1 draw in their next 10 matches made sure Ballerz x Pirates were propelled to the top of the league table, with vital wins against top of the log rivals New Era and Zamalek making the difference.

The Bucs went on to finish a staggering 11 points clear of their nearest rival, Artemis.

With a record 23 wins, 76 goals scored and 18 goals conceded throughout the 30-match season, Ballerz x Pirates won yet another significant trophy for the Club’s eSports section.

As far as individual accolades are concerned, players from the Ballerz x Pirates squad were able to snap up awards such as the Golden Boot, Assist King, as well as Golden Glove for the goal keeper with the most clean sheets in the SAPL Premier League.

Following this title, six of the Pirates players have been selected to represent South Africa in the VPG World Cup Qualifiers in 2021.

A very impressive start by the new team that will hope to carry this form on in 2021.