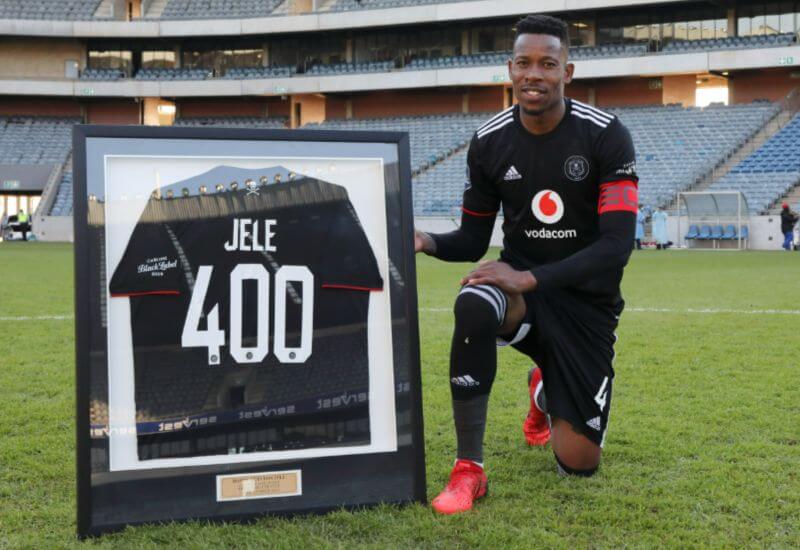 The football climate in the 21st century has made true club legends a rare commodity, but Orlando Pirates Captain Happy Jele is one of the few to have bucked the trend in recent years. The versatile defender has spent the entirety of his 15 years as a professional player at the Buccaneers.

His longevity has brought him to uncharted territory after becoming the most capped player in the Club’s history, surpassing another stalwart in legendary goalkeeper William Okpara.

In Saturday’s league fixture against Swallows FC, Jele became the first Orlando Pirates player to make 400 appearances for the Club, a remarkable event given the Club’s rich history.

Speaking exclusively to Orlandopiratesfc.com, “Magents” shared the secrets to his longevity, while also mapping out his goals for the future.

You’re now the most capped Orlando Pirates player in history. How does it feel to have played so many matches for one of the country’s biggest clubs?

HJ: It’s an honour for me to play for Orlando Pirates. A big club in the country, as well as the continent. To have been a part of the Club for 15 years is a big personal achievement, and I want to keep going and continue pushing.

What’s your secret to staying motivated and remaining at the top of your game after many years as a professional footballer?

HJ: Just being humble and dedicated, and also respect. Respecting the badge, the people around you, and respecting the fans. Plus working hard at training and on the field of play, as well as doing a bit extra. Even when no one is watching, the results will always show up on the field.

Going back to when you first arrived at the Club - Who are the players you’d say were instrumental back then in shaping you into the player and leader you have gone on to become?

HJ: There were quite a few. Even people I watched when I was still a young kid. The likes of John Moeti, Edward Motale, and William Okpara. When I joined the Club, there was Lucky Lekgwathi, Joseph Makhanya, Sailor Tshabalala, Edelbert Dinha, to name a few. I learned from them on and off the field, and I can say that helped me grow as a person.

What memory would you say stands out in your years as a Pirates player?

HJ: It has to be winning my first trophy with the Club. It was the MTN8. You know playing for Orlando Pirates and winning a trophy is a big deal. Then to go on and win a treble in that same season and repeat that the next season. That was a big moment. Another one that stands out was leading the team to the CAF Champions League final in 2013. As a player, you want to compete against the best. Even though we went on to lose that final, for me it was an honour to participate in that competition and making it that far whilst leading the team.

Lastly, what would you still like to achieve with the Club - both as player and leader?

HJ: Staying fit and doing my best on the field. The first thing is to play regularly but I would also want to win one or two more trophies before I call it a day. Hopefully, we can achieve that.