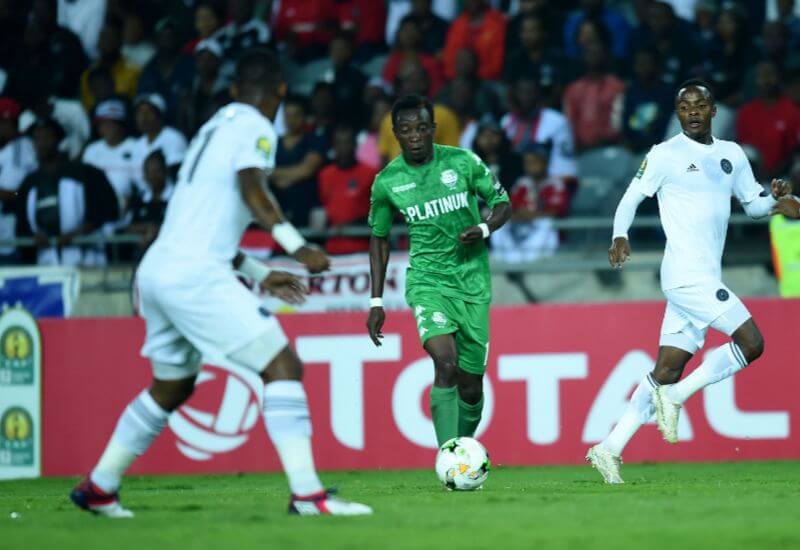 Kudakwashe Mahachi squandered a golden opportunity at the death to seal a come-from-behind victory for the Bucs, as Orlando Pirates were held to a 2-all draw in a CAF Champions League encounter which was played at the Orlando Stadium on Friday night.

The Zimbabwean winger was moments away from covering the weekend headlines when the ball rolled by his feet with the goal at his mercy, but instead of composing himself and pouncing on the opportunity, the 25-year old fluffed his shot, leaving the Buccaneers with everything to do in their last group match against Horoya AC.

Nothing less than victory will do if Pirates are to qualify for the knockout stages of the competition. The Buccaneers are currently in third place on six points, while Horoya sit in second place with one point more than the Soweto Giants.

Once again, and for the umpteenth time this season, Pirates have had to come from behind after conceded the first goal.

Having missed from the penalty spot in the 19th minute, Platinum attacker Never Tigere made amends when he fired a low strike which Alfred Ndengane deflected into his own net.

The visitors went 2-0 up before the break, this time from Rainsome Pavari, who tapped in from close range after Ndengane was out-muscled to the ball by Perfect Chikwende. The ball across an onrushing Sandilands could well have been left to cross the line, but Pavari was taking no chances.

As the referee signaled the end of proceedings, the visitors went into the break with a 2-0 lead.

Micho Sredojevic and his technical team rang in a change after half time, bringing on Zambian Augustine Mulenga for Ciao Marcelo.

Despite the changes, the visitors continued to frustrate the Buccaneers with their resolute defending. It took until the last 10 minutes of the game for the home side to threaten the Platinum goal and the pressure finally paid off when Luvuyo Memela's low cross was fired home by Thembinkosi Lorch.

The Platinum Boys were struggling to contain Pirates at this point and the visitors conceded again with three minutes left when Mulenga scored from close range to make it 2-2.

The visitors were then reduced to 10 men when Kelvin Moyo was sent off after denying Pirates striker Thamsanqa Gabuza a clear goal scoring opportunity in stoppage time.

The last chance of the game fell for Mahachi but the opportunity was lost as Pirates were held to a 2-2 draw by the Zimbabwean outfit.

Next match for Micho and his charges is a tough encounter in Conakry where they will take on Horoya AC.