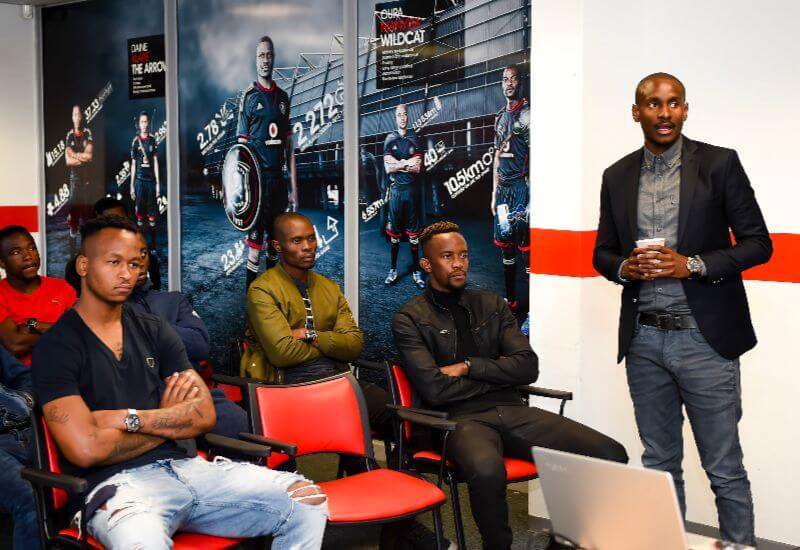 After announcing the signing of nine new players, the Orlando Pirates Technical Team welcomed the new additions to the Club by way of orientation at the Rand Stadium.

Following a largely positive season where the Buccaneers finished second in the ABSA Premiership, and qualified for the CAF Champions League, Micho Sredojevic’s men have strengthened in preparation for what will be an even tougher season with more fixtures and greater expectation attached to it.

Upon arrival at their new home, the Bucs players were met by Administrative Officer, Floyd Mbele as well as Assistant Coach Rhulani Mokwena, before being taken through a process of orientation into how the team plays and what the expectation is for all players who don the famous Black and White colours.

Orlandopiratesfc.com was on hand to meet the new recruits, who expressed different emotions at being with the Club, but all

Former Mamelodi Sundowns right back Asavela Mbekile declared the great feeling he has with being at the club, stating, “Playing for Pirates is one of the things you want to achieve as a footballer and I have done the first part by being here. The real hard work will begin when everyone gets back for pre-season. Pirates is a big team, so joining it feels great. I’m looking forward to being a part of the new generation of Pirates players that will be fighting for the domestic and Champions League title.”

As part of the induction, the players were taken on a tour of Orlando Stadium, getting into the changeroom, seeing the Club shop and also introducing them to another major facet of the club, the Learning Centre. The induction process had former Bidvest Wits winger Vincent Pule in a glowing mood and looking towards great things once the season gets underway.

“Usually you are inducted into a club during pre-season or sometimes as you go along you start to learn things, but this was very different. We haven’t even started with the pre-season program and we are already coming to grips with important aspects of this Club. It’s important that we have these sessions well in advance of the season because it sets the platform for things to come and also gives you a broader understanding of where you are, where the Club is going, and importantly how you fit into that grand scheme of things.”

Brilliant Khuzwayo’s first official foray into life as a Pirates player was largely emotional and drew inferences to the supporters and his late friend, Senzo Meyiwa. As a young goalkeeper, and also a homeboy of eMlazi, there are many comparisons with his friend and our former national team skipper.

“It’s very emotional for me [standing in these goalposts], knowing that this was the last place Senzo stood before he passed away. We come from the same place and we were close, so standing here brings back those memories and thoughts of him. I’m also looking out over the field and trying to visualise where I’d be distributing the ball, who will be running into the space and also imagining what it will be like playing in front of the fans in an official game. I’m really excited at being an Orlando Pirates goalkeeper and looking forward to making the supporters happy. We are, afterall, the Happy People.”

Linda Mntambo is living his dream as a Bucs fan who is playing for the team he supports. The orientation process was the cherry on the cake in his official opening expeience. “I had a good time with the orientation because I have always wanted to be a Buccaneer. I live across the road from the stadium so I have always supported the team. I never missed a game at Orlando while I was growing up and I always dreamt of seeing myself playing here. The last time I played here was terrible though; we lost 5-0 to Pirates while I was still at Jomo Cosmos. I remember being very sad as I walked home after the game but also felt a little bit of joy for playing on the pitch despite the result. Now that I’m officially a Buccaneer, I’m over the moon and can’t wait for the season to start.”

Affectionately known as ‘Figo’, the new man paid tribute to his former Chairman, Chippa Mpengesi, and how he affords his players an opportunity to grow in their careers.

“It’s a great opportunity being here and re-uniting with my former team-mates Phetso and Diamond. People always say that Chippa United is the Pirates Development Team, but what they don’t realise is that the team gives us the platform to play so that we are seen by big teams like Pirates. And when they come knocking, the Chairman Mr Mpengesi is always willing to let us go. He’s not selfish with the talent and he gives us the opportunity to go and fulfil our dreams. It’s every boy’s dream to play for one of the big teams, especially Orlando Pirates, and for me being a very near local makes me very excited to be here.”