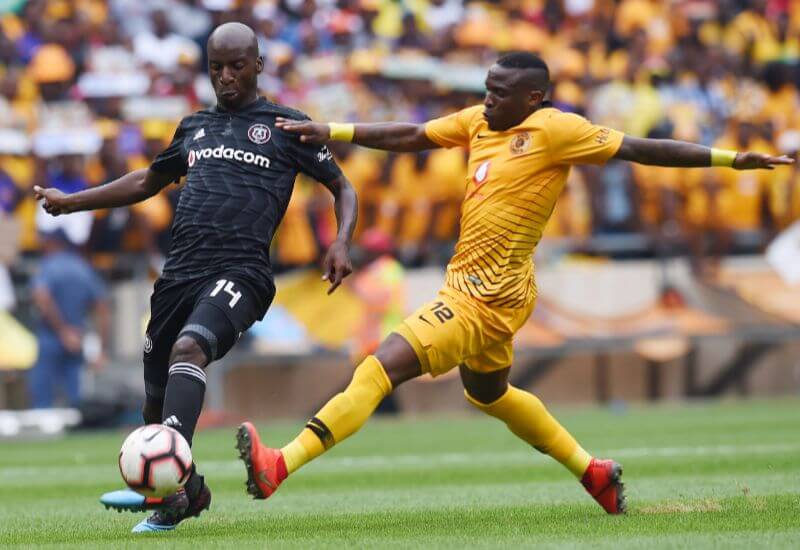 Orlando Pirates came from a goal down to draw 1-all with rivals Kaizer Chiefs in an Absa Premiership encounter played at the FNB Stadium on Saturday afternoon.

This was the final derby of the 2018/19 season and with the draw this afternoon the Buccaneers set a new record in the Soweto Derby by stretching their unbeaten run against Amakhosi to 12 matches.

The hosts had a point to prove having lost three consecutive matches against the Sea Robbers of Orlando already this season, despite the coaches of both benches coming into this encounter with their own respective unbeaten records to preserve.

The match started at a frantic pace with the first chance of the game coming as early as the second minute with Khama Billiat firing a snap shot at Wayne Sandilands, who was earning only his second league start of the season.

Amakhosi, who were dedicating this match to midfielder Wiseman Meyiwa, were dominating proceedings early on as they opted to pressure the Buccaneers high up, using the attacking trio of Billiat, Leonardo Castro and Pule Ekstien.

Pirates’ running power in attack nearly brought them a goal on 11 minutes, with Ben Motshwari’s surge forward only halted by an excellent tackle from Teenage Hadebe, while Xola Mlambo should have at least hit the target from the follow-up.

Chiefs looked dangerous with their fluid build-up play, though the Buccaneers’ backline marshalled by captain Happy Jele and derby debutant Alfred Ndengane tightened up through the rest of the half, making chances much harder to come by.

Pirates, meanwhile, looked to stretch the play whenever possible and one such example saw Vincent Pule send a dangerous ball into the danger area and just out of reach for Justin Shonga.

In all, there was little to choose between the teams in the first 45 minutes and it was no surprise when the halftime whistle saw the score still locked at 0-0.

The stalemate lasted only nine minutes unto the second stanza, when a brief rush of blood to the head by Asavela Mbekile led to a penalty being awarded to the home side. Defender Daniel Cardoso stepped up and coolly converted from the spot.

The visitors upped the ante in search of the equalising goal but Chiefs responded by reinforcing their defence with the introduction of the hard tackling Willard Katsande and Ramahlwe Mphahlele.

Pirates responded to going behind by putting together some sustained spells of pressure, but the narrow focus of their attack made it relatively easy for Chiefs to hold them at bay, even after the introduction of Augustine Mulenga to boost their forward line.

The persistent pressure from Pirates finally paid off in the 81st minute courtesy of a goal by Thembinkosi Lorch who ran on to a defence splitting pass from Man of the Match Ben Motshwari.

Lorch beat the offside trap and then showed remarkable composure to round goalkeeper Daniel Akpeyi and score from a tight angle to make it 1-1.

Chiefs got a last opportunity to score with Billiat sending a goal bound strike in the 95th minute of the game but fortunately, Sandilands was on hand to make a brilliant save.

That proved to be the final major attacking highlight of the match as the referee called time in the 166th derby.

Pirates are now off to the airport where they are expected to catch a late flight to Dubai.

The Buccaneers will next be in action on Tuesday when they face Esperance de Tunis away from home for their Group B CAF Champions League encounter.