All square at Loftus Versfeld 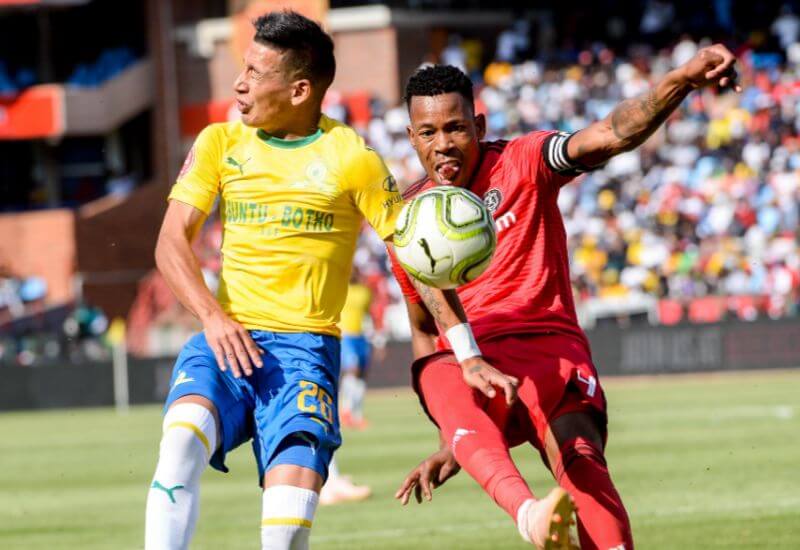 Orlando Pirates and Mamelodi Sundowns played out to an enthralling goalless draw in an Absa Premiership clash in Tshwane on Saturday afternoon.

Renowned French mathematician Blaise Pascal once described the game of chess as a “gymnasium of the mind”. This is exactly what played out at Loftus Versveld as the tactical brains trusts of both sides locked horns for this crucial Absa Premiership encounter.

Counter-move followed counter-move but at the end of it all there was no “check mate” as the two teams cancelled each other out, leaving the Buccaneers still in first place with 23 points and Sundowns in third with 18 points albeit with four games in hand over the Soweto Giants.

The match started at a frantic pace with the first chance of the game coming as early as the 1st minute after Andile Jali intercepted a ball from midfield and ran 30-metres before laying off a pass to Jeremy Brockie, but the New Zealander sent his powerfully struck shot wide of goal.

Pirates responded with an attack of their own and registered their first shot on target in the 7th minute courtesy of a strike by Thabiso Kutumela which was well saved by Denis Onyango.

It was end-to-end stuff early on in the match and by the 11th minute, Sundowns had created yet another goal scoring threat, this time from Lyle Lakay who almost broke the deadlock, but his long range shot shaved the crossbar.

Four minutes later Jali was substituted with what looked like an apparent hamstring injury and was replaced by Tiyani Mabunda.

The next decent effort on goal only came on the half hour mark when Gaston Sirino worked himself into space 18-yards out, but his stinging shot was well saved by the Pirates keeper.

In what was turning out to be a wonderful football spectacle, the game soon turned sour with the hard tackles flying in from the home side, which bizarrely went unpunished by the man in the middle.

The tension spilled over close to the end of the half when a Sundowns fan attacked assistant coach Rhulani Mokwena on the bench. This sparked a brawl involving both dugouts, forcing the game to be halted temporarily.

Pirates had the last real say of the half when Justin Shonga went for goal from a 22-yard free-kick but his effort curled inches wide of the target.

The first decent chance of the second half fell to Lebohang Maboe eight minutes after the restart when he cut inside the from the flank, but his 16-yard shot went just wide the post.

Sundowns substitute Phakamani Mahlambi came close to opening the scoring just after the hour mark when he beat two defenders on his way into the box, but his close-range shot was brilliantly stopped by the Pirates keeper.

A combination of the effects of the heat and the frantic pace of the game resulted in tired legs setting in much sooner and this saw less goal scoring chances created as the game went on.

Augustine Mulenga who had come on for Kutumela, called the keeper to action with a long range strike in the 73rd minute but the Ugandan goalminder was well positioned to make a routine save.

In the 80th minute Thapelo Morena broke into the box from the right flank, but Pirates goalkeeper Siyabonga Mpontshane was quickly off his line to deny him.

Both teams threw players forward in the final ten minutes of the match, but neither could find the winner as the game ended all-square.