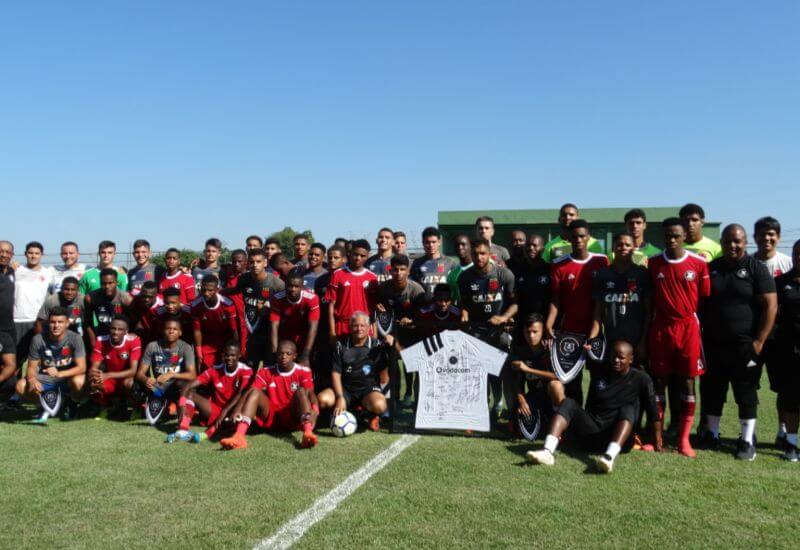 Matchday three in Rio de Janeiro and the Project X team embarked on a journey to the north to take on CR Vasco da Gama in the Friday morning kickoff. With two games under the belt and a growing confidence, ‘Os Turistas’ as the boys have become known, arrived in good spirits at the Artsul facility ahead of the game.

Things took a negative turn in the 16th minute when Vasco opened the scoring with a well-placed shot inside the box. The PJX goal was under siege for a spell, and the deadlock would soon be broken with Alexi “Lesilo” Apollonatos beaten at his near post.

A pretty open game in the first half as both sides traded blows, looking to extend or cut their respective deficits. Under the unforgiving northern heat, both sides went into the break with Vasco leading 1-0.

The half time break seemed to have energised the PJX as they started the second half with wolfish intent. Vasco da Gama fund themselves the victims of a high-tempo-three-man press whenever they were on the ball and it seemed to frustrate Vasco, who seemed to be tiring under the intensity.

The 57th minute would prove vital as PJX pulled one back when Zakhele Lepasa fired his third goal of the tour. A neat build up down the right flank saw Bonga Maphumulo play a great ball into the area for the oncoming Lepasa to smash it home from a tight angle. 1-1.

PJX found their stride after that equaliser and were relentless in their attack. Wave, after wave, after wave… Vasco da Gama were on the rocks like the ships of the famed sailor they are named after. There was no respite or opportunity to explore new lands this time around as PJX tore through the middle of the Vasco rearguard. Augustine Mahlonoko played an excellent pass to Lepasa, who powered into the box before cutting back inside to the Alexandra-born midfielder, Thabiso “Smiley” Botopela to tap home. A good end to a positively flowing attack move. 2-1.

Lepasa made it 3-1 with a well-executed finish after getting onto the end of a Bonisile Mbangwa pass. ‘General’ spotted the striker in space and looped a ball into the channel for Lepasa to chase down. The keeper came off his line and Lepasa skipped around him, to tap into the open net.A visibly defeated demeanour began to set over Artusul with more than 10 minutes left to play.

The Project X squad ended the day victorious, with a 3-1 come-from-behind win to see off the Brazilians and keep ‘Os Touristas’ undefeated on tour.

Vasco da Gama Regattas Club was founded in 1898 by a group of rowers, and was inspired by the celebrations of the fourth centenary of the discovery of the sea route to India, which took place in 1498. The association of the club is named after the Portuguese navigator, Vasco da Gama.

Despite being founded and consecrated in rowing, the club Vasco da Gama offers other sports such as athletics, beach volleyball, basketball, beach football, while traditional football remains their powerhouse.

Their colours are mainly white and black and have a strong historical significance: black refers to the unknown seas of the East crossed by Vasco da Gama; the white of the diagonal strip refers to the route discovered by the admiral; the black and white also fit the idea of communion of ethnic groups since it was the first club in Brazil to fight racial and social prejudices, having been the first in the history of Brazilian sports clubs to have elected a non-white president.

Their accolades of the club: