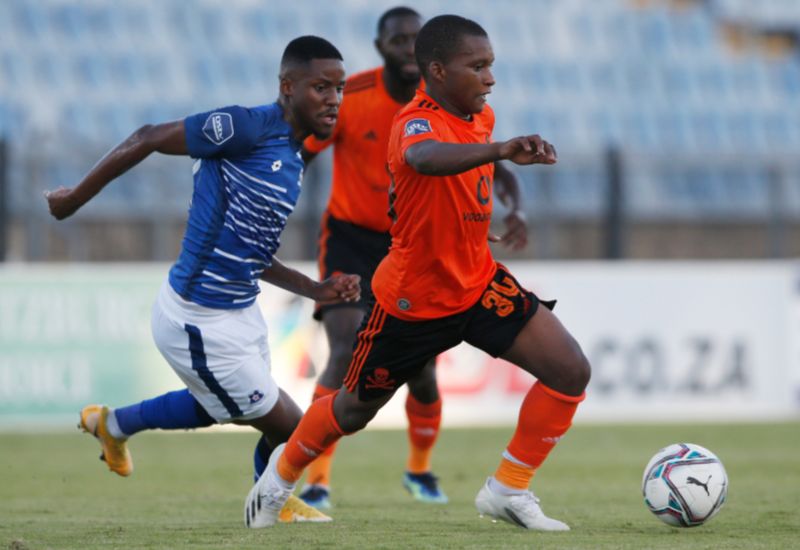 Orlando Pirates academy graduate Azola Tshobeni has been praised after making his professional debut this past weekend.

The 18-year-old was thrust into the starting line-up against Maritzburg United by Coach Josef Zinnbauer and the diminutive midfielder gave a good account of himself as the Buccaneers went on to register a much-needed victory.

“I am pleased with my debut,” said Tshobeni. “But more importantly, I am happy for the maximum points that we got on the day.”

“In terms of personal accolades, this is indeed a day to cherish for me and my family. Everyone has been waiting for my debut since my promotion to the Orlando Pirates first team, I am still in disbelief as I did not expect to make my debut so soon and not only that but to debut as a starter makes this occasion that more special.”

Tshobeni who admits being nervous early on in the match, thanked his teammates for helping him to settle down.

“When the whistle sounded at the start of the match, I was nervous. Even though the stadium was empty I knew everyone was watching from all corners of the country. It was nerve-wrecking at first, but I would like to thank my teammates for helping me settle. Their words of encouragement throughout the match helped me to play my football.”

Tshobeni, who at 18 years 7 months and 16 days, becomes the third youngest player (in PSL era) to mark his debut for the Club.

His rise in the development ranks has been astronomical since joining the Club from local side Happy Boys at Windmill Park, where he went on to captain the u17 Pirates team that lifted the 2019 Future Championship. Later that year, Tshobeni was selected to represent the Project X Squad which toured England where they played against the likes of Manchester United, Fulham and West Ham. It was after this tour where Tshobeni was promoted to the first team.

“I think the exposure and experience playing against these international teams has helped me a lot. Especially the games we played overseas, the players there are big and very physical which I think helped me to get used to the competitiveness and demand of the professional game.”

He added: “Now that my first game is behind me, I hope to build on this game and work on getting more matches under my belt. At the end of the day, its one thing to play one match but to play consistently is a different ball game. It requires a lot more work.”