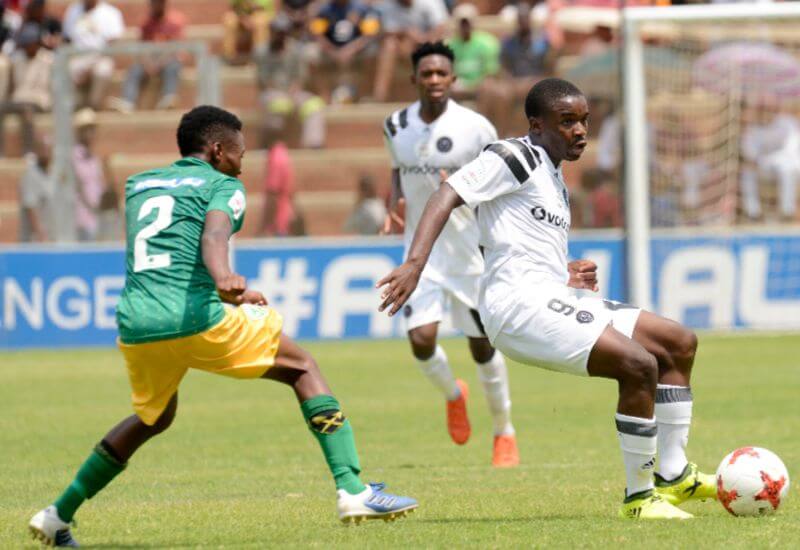 The Orlando Pirates SAB side kept up their title hopes with a 2-1 victory over Setheo United in Alexandra on Saturday.

Following their second draw of the season against Senaoane Gunners last week, the Buccaneers bounced back to notch their 14th win in 19 games to remain second on the table by two points behind archrivals Kaizer Chiefs.

Andile Tshabalala, who has seen a resurgence in form of late, fired the Bucs into an early lead in the 4th minute before the joy was shortlived by a Setheo equaliser 20 minutes later. It took a late Fezile Gcaba header from a corner, deep in the second half to see the Bucs safely to all three points.

Our next match in the SAB league will be against the University of Johannesburg on Saturday, 24 February 2018. UJ are currently third and three points behind the Bucs, in what is turning out to be a three-horse race for the title.

Meanwhile, the MDC side’s league aspirations were dashed in Makhulong, after a 2-0 defeat at the hands of Golden Arrows. The Durban-based outfit created history in becoming the first side to win the Multichoice Diski Challenge title twice since the competition’s inception.

The Soweto Giants enjoyed a fair share of possession in the 1st half without making the most of it in front of goal. They would soon rue the missed opportunities when Tsebo Tsotetsi gave away a penalty, which Nduduzo Sibiya sent into the bottom corner for the lead in the 73rd minute.

The frustration was further compounded when a third Bucs penalty appeal was turned down by referee Victor Hlungwani, leading to a quick counter by Abafana Bes’thende, and a freekick outside the Pirates box. Sibiya once again stepped up to clip his freekick into the same corner as his penalty and with it, confirmed the result on the stroke of full time.

Orlando Pirates will play Chippa United in the final game of the MDC league season at the Wolfson Stadium on Saturday, 25 February 2018.