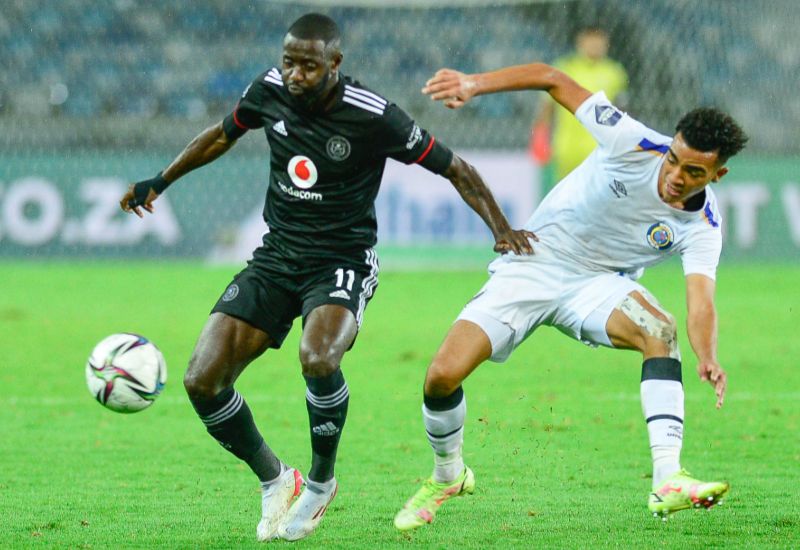 Orlando Pirates displayed a never-say-die attitude to steal a dramatic 3-2 win against SuperSport United in their DStv Premiership encounter at Orlando Stadium on Wednesday night.

Both sides went into the fixture looking to find some consistency in league football and arrived at a wet Orlando Stadium, following some heavy late afternoon rains.

The conditions seemed to be not much of a bother for the visitors, who were quicker to adapt, immediately placing the home side’s defence under early pressure.

There wasn’t much of a wait for the game’s opening goal, with sloppy defending from a corner costing the Buccaneers dearly when the ball landed in the path of Kegan Johannes, before the United winger half-volleyed into the net just seven minutes in.

Pirates’ pursuit for level parity was disrupted in the 16th minute when influential midfielder Thabang Monare had to be substituted off after taking a knock, with Abel Mabaso brought on.

The very first action after the change brought on more joy for United, as Ghampani Lungu headed in from another corner to make it 2-0 inside the first 20 minutes.

Pirates’ first real chance of the encounter came when Bandile Shandu darted down the right flank, delivering a fine cross for Deon Hotto, who headed wide from close range.

The Tshwane outfit then looked to edge further ahead through Keegan Phillips as he took a firmly-struck shot from range, with Richard Ofori’s fingertips deflecting the ball wide of the target.

There were close calls at either end after the half-hour mark. The first fell to Mabaso, who was played in by Paseka Mako, following a determined run down the left by the Bucs left back, only for the ball to find itself straight in Ronwen Williams’ gloves.

The next was through a set-piece taken by Jamie Webber, who grazed the upright with his shot from just outside the Bucs penalty area.

The first half would end just as dramatically as it began, with Pirates earning two quick penalties as the break approached.

Mabaso was the first to be brought down inside the box as he was caught from behind by a desperate challenge from Johannes.

Hotto stepped up and calmly slotted in, sending the experienced Williams the wrong way with a powerfully-taken shot.

Terrence Dzvukamanja was the next man to go to ground after the Buccaneers tried to revive a move that almost ended when Shandu struck the upright, with another clumsy challenge from Johannes allowing the home side the opportunity to draw level.

It was up to the Namibian international to do the honours from the spot once more, and he completed his brace by sending the ball further out of reach of the Bafana goalkeeper, who again dived in the wrong direction.

With the theatre of the first half, the second 45 had a lot to live up to, and there was a bit of drama two minutes after the restart when Lungu’s header from a corner was cleared off the line by Hotto.

Things would however mellow out, with neither side managing to create out-and-out chances at goal throughout much of the middle part of the second half.

There was a half-opportunity for Mako in the 76th minute when he was located inside the box by a neat cross from Hotto, but sent his shot looping over the bar with a rushed shot.

Pirates survived a late scare deep into injury time from Thamsanqa Gabuza, whose shot fizzed across the face of goal to land wide of the target.

Added time proved a charm for the home side, who took the lead for the first time in the encounter through a splendid strike from Goodman Mosele when he was unselfishly teed up by Mabaso before curling the ball past an outstretched Williams for a dramatic winner.

The result propelled the Buccaneers to third place in the standings, level on points with second-placed Royal AM.