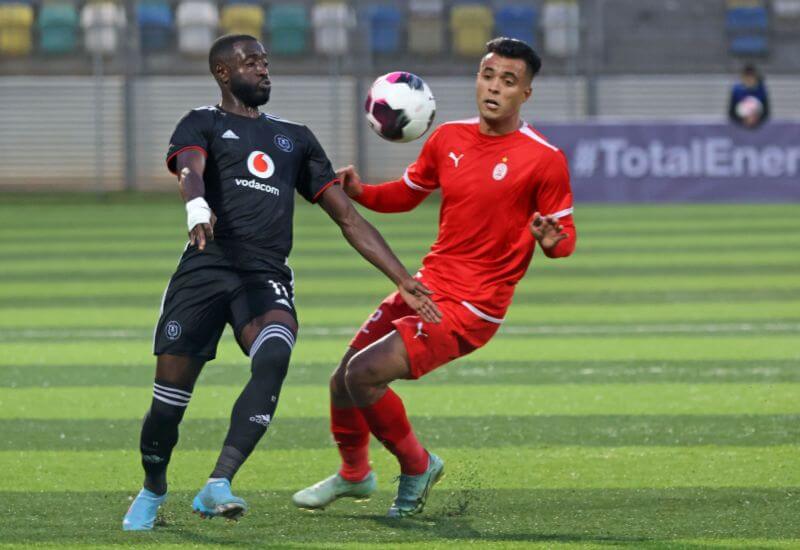 The Buccaneers trekked up to Benghazi still perched at the top of the Group B standings after victory over JS Saoura of Algeria in their opening match, while their opponents were yet to get their campaign on the road after the postponement of what would have been their opener.

The two sides sussed each other out in the early exchanges, with most of the action occurring in the middle of the park, with shots at goal at a minimum on both ends.

This lasted a mere 14 minutes as the home side was awarded a free-kick after Bucs Captain, Happy Jele was deemed to have committed a foul on the edge of the box.

From the set-piece, Pirates were punished as Sanad Al Quarfali opened the scoring in spectacular fashion for the Libyans.

Pirates’ search for the equaliser was initially a frustrating one, with the home side employing an aggressive press to disrupt their build-up play.

It took a moment of magic to open up the home side defence as Bandile Shandu emerged in an advanced position before unleashing a powerful shot, which left a diving Mohammed Abukhres with no chance as the ball crashed into the back of the net, making it 1-1 in the 27th minute.

The Soweto Giants, however, did not have much time to enjoy level parity with Al-Ittihad hitting back almost immediately through a long-range shot from Maud Eisay, who beat Siyabonga Mpontshane with a low strike to his right.

The visitors had to contend with a confident display from the home side, who hogged possession for an elongated period towards the end of the first half.

Their never-say-die spirit however shone through as the halftime whistle drew near, with Shandu popping up in the right place at the right time to poke one into the net after a goal-line scramble right on the 45-minute mark.

The second half began with Pirates enjoying more of the early possession as well as territorial advantage, but the breakthrough would come at the other end eight minutes after the restart.

This was when Omar Al Khouja spotted Mpontshane off his line and fired past him from a fair distance out to make it 3-2.

The home side then took to protecting their lead, trekking back in numbers as the Buccaneers sought to draw level for the third time.

Second-half substitute Gabadinho Mhango was denied from close range in the 75th minute when he cut in before shooting from a tight angle to force a save out of Abukhres.

Despite enjoying a vast majority of the possession throughout the final ten minutes, Pirates were deprived of any out-and-out opportunities, thanks to Al-Ittihad’s ultra-defensive tactics.

The hosts managed to hold on to claim victory in the end, with the Buccaneers unable to grab a last gasp goal and a crucial away point.