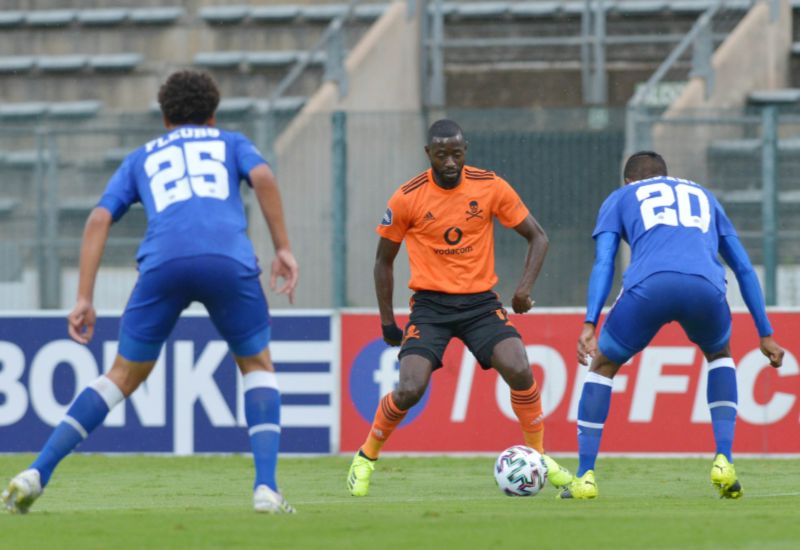 Orlando Pirates had to settle for a point in their midweek DStv Premiership fixture after being held to a 1-1 draw by SuperSport United at Lucas Moripe Stadium on Wednesday.

In what was the Buccaneers' first league assignment in over two weeks, they met a side sitting pretty in second place in the standings, three places above them with four points separating the two sides.

Log position did not seem to be reflected on the field of play early on, with the visitors making most of the playing.

It took just ten minutes for the Soweto Giants to be rewarded for their early dominance, when a move started down the middle by Fortune Makaringe was finished off by Vincent Pule, who finished past Ronwen Williams into the net after receiving a short pass from Deon Hotto.

Pirates could have made it 2-0 halfway through the first half after a corner kick, delivered by Hotto, who could not find an orange shirt inside the box, despite the best efforts of Makaringe and captain Happy Jele to turn the ball into the net. In the end, United survived the goalmouth scramble as they cleared away the danger.

There was a forced change in the Buccaneers camp, when Thembinkosi Lorch limped off soon afterwards to be replaced by Azola Tshobeni.

The Buccaneers started the second half as they began the first, dominating possession in the first five minutes.

However, United wrestled back the initiative towards the hour-mark, forcing the visitors to do more of the defending.

The home side's persistence paid off eventually when Ben Motshwari turned the ball into his own net while trying to keep out a shot from Ghampani Lungu.

Trying to restore their lead, the Soweto Giants pushed forward and had a few opportunities to get back in front.

Hotto could have made it 2-1 in the 80th minute when he connected with a clever pass from Siphesihle Ndlovu, but could not compose himself well enough to pick a spot in the back of the net, as he sent the ball wide instead.

Second-half substitute, Kabelo Dlamini almost had the final say in the game with a venomous shot that fizzed just over the crossbar, with the final whistle sounding afterwards.

The result meant that the Buccaneers had to settle for a point, which moves them up to fourth in the standings.