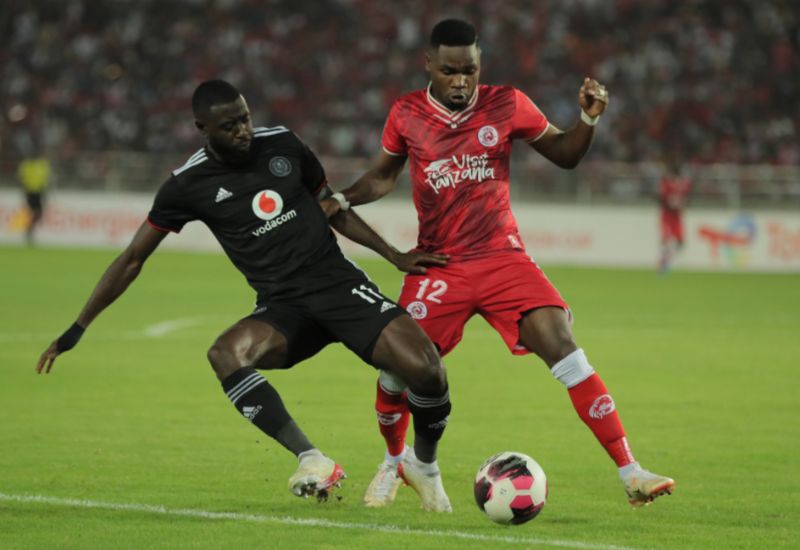 A second-half penalty proved to be the downfall for Orlando Pirates, who succumbed to a 1-0 defeat against Tanzanian giants, Simba in the first leg of their CAF Confederation Cup in Dar es Salaam on Sunday night.

Stepping into the intimidating atmosphere of the Benjamin Mkapa National Stadium, the visitors sought to find an early advantage in the tie before the all-too-crucial second leg at Orlando Stadium.

Simba’s dominance in the opening five minutes did not yield much in the form of chances at goal, with Richard Ofori only called upon to make some routine saves as the home side surged forward.

Kwame Peprah could have provided a moment of magic just before the 10-minute mark, as he made a solo run from the halfway line before aiming for the far post, but only succeeded in directing his shot wide.

The Ghanaian striker had a busy evening, which continued when he found himself in space and attempted to catch Simba keeper Aishi Manula with a snap-shot, which he sent even further off target.

He was again in the thick of things in the 34th minute, freeing himself of the defenders’ close watch as he turned to shoot, but sent his shot straight to Manula.

Simba could have headed into the break a goal up, courtesy of ex-Pirates midfielder Bernard Morrison, whose low, curling shot required a sharp save from countryman Richard Ofori, who provided just that to keep scores level.

The second half began with both sides getting their best chances from set-pieces, as Deon Hotto’s ball from a free-kick 10 minutes after the break located Kabelo Dlamini, whose header couldn’t connect well enough with the ball to cause Simba any real problems.

The Buccaneers’ wall was resilient at the other end, keeping out a well-struck shot before Morrison made a meal of a free-kick awarded to his side soon after.

The Ghanaian midfielder sought to make amends, and did so in the form of a run which forced a desperate slide off Happy Jele, who was adjudged to have fouled his former teammate - a decision that was later upheld after consultation with the Video Assistant Referee (VAR).

Tanzanian international, Shomari Kapombe was the man entrusted with the spot-kick, and he sent the hosts into the lead in the 68th minute by sending Ofori the wrong way.

Changes were made by the Pirates dugout, with Fortune Makaringe among those introduced to provide some fresh legs.

The midfielder was heavily involved in the pursuit for the equaliser, forcing a sharp save from Manula in the 76th minute before threading a pass through for Zakhele Lepasa, who was beaten to the ball by the keeper.

The all-too-crucial goal continued to elude the Buccaneers, who will have a bit of a mountain to climb as they try to wrestle back the advantage when the two sides meet at Orlando Stadium next Sunday.