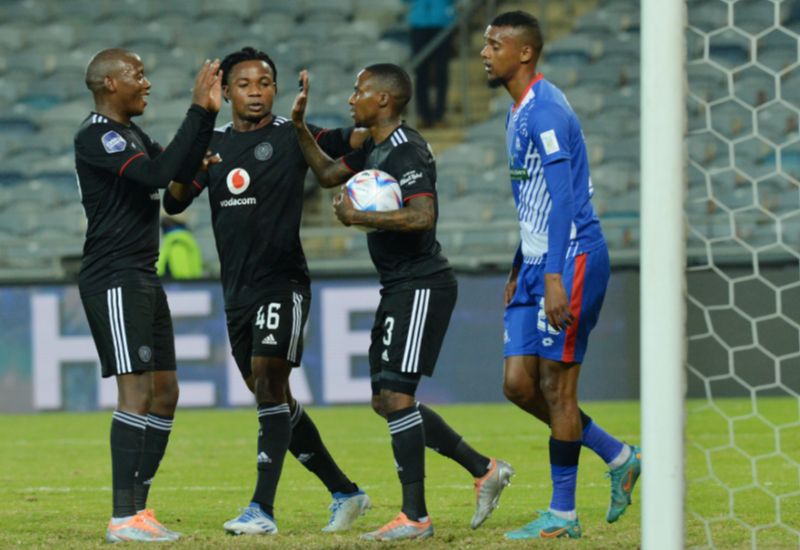 Two goals in each half handed Orlando Pirates a convincing 4-1 win in their DStv Premiership encounter against Maritzburg United at Orlando Stadium on Tuesday night.

Returning from continental duty, the hosts looked to sign off on a winning note in their last home game of the season, while seeking the first three of nine points needed to clinch a spot in African club competition next season.

Bucs had retained the same starting XI that did duty in last Friday’s CAF Confederation Cup final, with the opposition also keeping changes to a minimum after being in action over the weekend.

Fresh off a gruelling outing, with minimal rest before kicking off on Tuesday, the home side was immediately placed on the backfoot, with Maritzburg pushing them well into their own territory where the dangerous Friday Samu unleashed a shot which rolled agonisingly wide of the target, with Richard Ofori outstretched.

The more threatening chances would however occur on the other end of the field, where Thembinkosi Lorch proved to be a menace to the Team of Choice’s defence.

The in-form Bucs attacking midfielder spurned a golden opportunity first up, running into a piercing pass from Bandile Shandu before shooting straight at goalkeeper Marcel Engelhardt in a one-on-one situation.

The 28-year-old did manage to get the better of the German shot-stopper ten-minutes in, cleverly guiding the ball beyond the keeper’s reach only to be denied by the woodwork.

It did not take much longer for his persistence to pay off as he again found space past the defence in the 21st minute before calmly slotting in for the game’s opening goal.

Maritzburg looked sharp in their pursuit for the equaliser, but could not trouble Ofori, with Pirates not faltering in their defensive discipline despite being starved of the ball.

The Buccaneers looked to make the most of their next forage into the opposition half on the 30th minute mark, with Captain Happy Jele becoming the next player to be denied by the upright as he rose high to head towards goal after meeting an inviting cross from Deon Hotto.

A thunderbolt from Tawanda Macheke five minutes from the break threatened to send the two sides to the tunnel level on the scorecard. However, the decisive blow was delivered by Peprah, who was perfectly-positioned down the middle when Lorch hooked one back into the box from the right flank, getting a touch from Kabelo Dlamini before the 21-year-old striker shot past Engelhardt three minutes from halftime.

Pirates continued to be the more dominant of the two sides in the second half, remaining confident on defence while continuing to pose a threat with ball in hand.

This was on show on the hour mark, in the move leading up to their third goal, when a quick transition from defence to attack culminated in a composed finish from Hotto, who was a recipient of a good cross from Lorch after some fantastic work down the right flank.

It wasn’t to be one-way traffic in the second half, as Maritzburg hit back almost immediately through Samu, who finally found a way through the home side’s resolute defence, making it 3-1.

Pirates’ could have celebrated a fourth in the 67th minute when Innocent Maela headed past Engelhardt from close range, but his excitement was cut short by the offside flag.

That fourth goal proved not to be too far off with Lorch again in the thick of things, with his deft touch creating oodles of space for Dlamini, who had more than enough time to pick his spot and make it 4-1 with 20 minutes left to play.

With the result beyond doubt, the Buccaneers were largely untroubled, while almost making it five through second-half substitute Tshegofatso Mabasa, who was denied by a good Engelhardt save.

Three points had long been sealed by the Bucs in the end, as they now shift their focus to their next assignment, an away league game against Royal AM on Friday.