Bucs brought down by Spartak Moscow 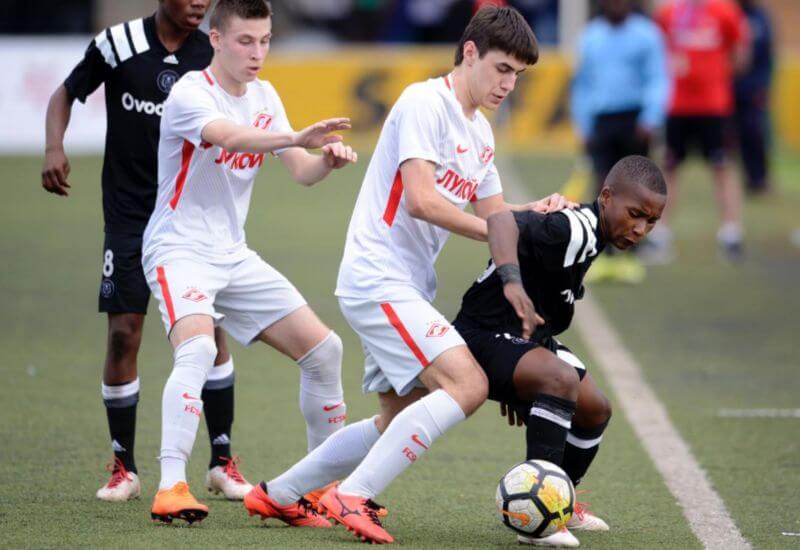 The second day of the Future Champs International tournament was one that the Orlando Pirates under 17 team would soon forget in a hurry. After their resounding opening day victory over Black Africa HopSol, the Buccaneers’ momentum was cut short by the physical presence of Spartak FC of Moscow, who recorded a 2-1 victory.

For the second game in a row, the Young Bucs went a goal down and had to chase the game against an even tougher, stronger opponent than the day before. The Russians took the lead through Ilya Bykovskij, who got on the end of a counter attack which started on the Bucs’ left. The home side failed to clear their lines convincingly and the ball fell into the path of the oncoming skipper who rifled an effort into the top corner from outside the box in the 4th minute of the game.

The resurgence was short-lived as the Bucs conceded a penalty a minute later, when Nikita Iosifov was brought down in the box, by keeper Fanie Raludzingana. Both players dusted themselves off and prepared to face each other from 12 yards, with Iosifov making no mistake, hitting his spot kick down the middle.

Both sides went into the break with the Bucs trailing 1-2, and it remained so until full time.

Simon Marange, the coach of the Pirates U17 had mixed feelings about the game, but still managed to draw some positives from how his side played today.

“It’s always tough when you concede early in the game. It feels the same as coming out the changeroom already 1-0 down before kickoff so everything you do is in trying to get back to some level of equality. We recovered well to equalize, but all that work was undone when we conceded a penalty a minute later.”

“In the second half we struggled with their low block. As we got more desperate to stay in the game, we started losing a bit of shape and width. We didn’t play with the right tempo and as a result we kept getting caught when we tried to build up – which was very slow.”

“On the positive side, we generally kept the ball very well and combined nicely in midfield. We showed hunger and determination, even when we were down, and that shows that the boys are willing to fight for each other and the team. It’s a pretty good base to work from.”

The next match is on Wednesday, 21 March 2018 against Spanish outfit Espanyol at 14H30 at the Nike Centre.