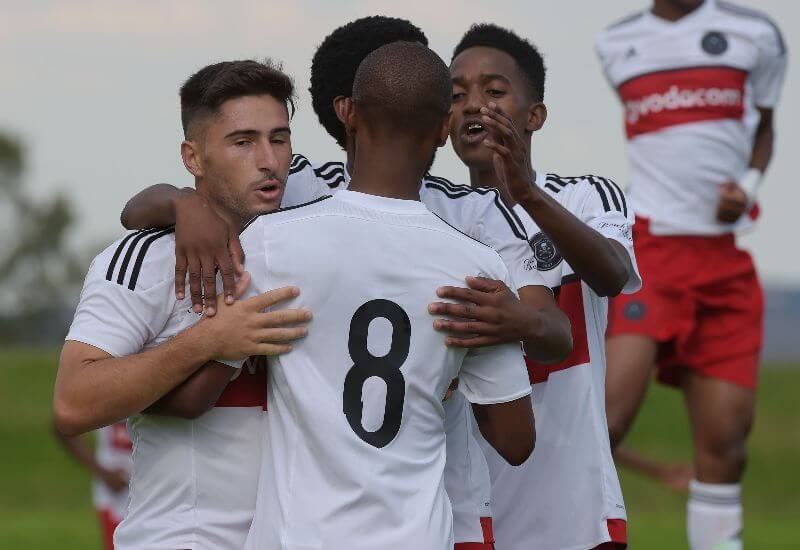 Two goals in the first half and a brace at the death by Grant Peters was enough to put Inqaba to the sword in Ennerdale on Sunday afternoon, as the Mighty Buccaneers romped to a 4-0 victory in the SAB League.

The win keeps the Bucs on top of the table, with three games to go.

Ricardo Lourenco, who started on the bench in the sides fixture on Saturday against Bidvest Wits, was the first to open the coring with a trademark effort from outside the box. Lourenco’s much celebrated technique and left foot was put to good use as he left the Inqaba keeper with no chance in the 16th minute.

The skipper was not done, as the Bucs kept probing, putting the home side under pressure. It would take nearly 25 minutes before the Inqaba defence was breached again, when Katlego Cwinyane got onto the end of a Lourenco delivery to head home and extend Bucs’s lead.

The sides went into the break with Pirates sitting confidently at 2-0.

The second half saw a different Inqaba that put up more of a fight and refused to rolled over as they held out defensively for large portions of the half. Without needing to chase the game, the Bucs used the comfortable position to try combinations and knock the ball around, conserving energy sapped by the previous day’s match and travel between Johannesburg and the Free State.

The experience and game management shone through towards the end as the visitors stepped up their tempo, reaping rewards in the 89th minute when Peters fires home a third goal from close range.

The mercurial Bucs forward, who occupied a more advanced position in the Bucs line in place of free-scoring Zakhele Lepasa, didn’t wait too long to notch his second as he got onto the end of a low cross by Thobela Sikhakhane and seal the 4-0 victory on the road.