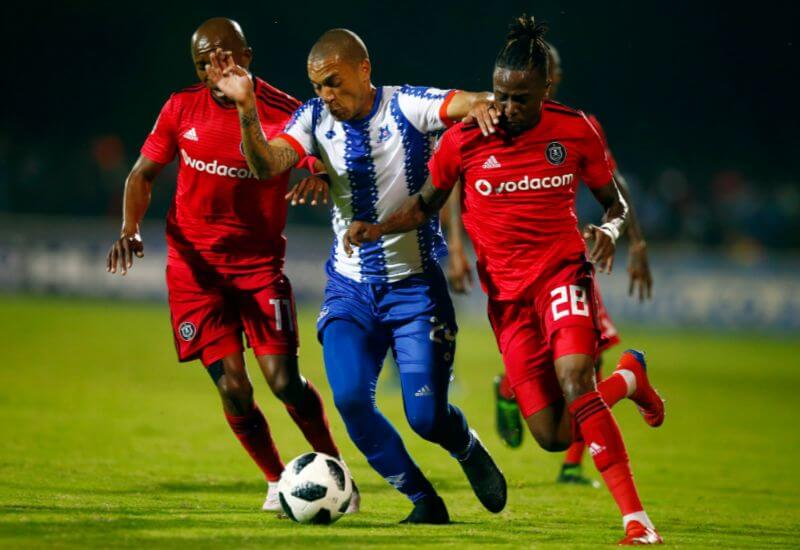 Orlando Pirates secured a crucial 1-0 victory away to Maritzburg United in an Absa Premiership clash played at the Harry GwalaStadium on Wednesday night.

A second half goal by Vincent Pule was enough to see the Buccaneers move three points ahead of the chasing pack.

Although this was a match between number one and sixteen on the log standings, there was little or no separating the two sides in the opening half of the game.

The Team of Choice who were playing their last home match of the season were desperate to give their home fans a game worth remembering.

Debutant Kwanele Hlongwane almost put his side 1-0 up as early as the 11th minute after pouncing on a poor clearance from Nyasha Munetsi but his shot was blocked by Happy Jele.

The visitors were in attack a few minutes later on the left flank as Pule pounced on a poor back pass by the United defence and laid off a pass for Thembinkosi Lorch who unleashed a goal bound strike which was well blocked by the experienced Nazeer Allie.

The youngster Hlongwane threatened again in the 29th minute after breaking the offside trap to run at goal unfortunately (though fortunately for the Bucs faithful) his strike went agonizingly wide of Wayne Sandilands’ goal.

The second half was only four minutes old when the Buccaneers threatened the United goal mouth. This time it was Justin Shonga who failed to convert when he latched onto a loose ball in the box but instead of testing Ofori he steered his shot wide of target.

The Buccaneers finally broke the deadlock in the 67th minute after Pule pounced on a deflection off a Maritzburg United defender to slot the ball into an empty net.

The remaining twenty minutes activated “squeaky bum time” as the visitors had to endure wave-after-wave of attack from a spirited Team of Choice side, but fortunately the resolute Pirates defence would hold off the threat and claim all three points.