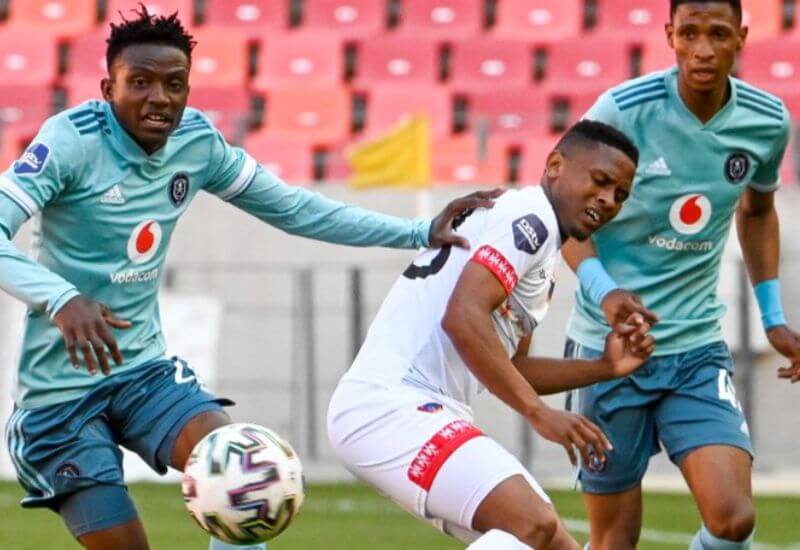 Orlando Pirates came from behind to churn out another confident performance in Gqeberha, as they ran off 3-1 winners over Chippa United at Nelson Mandela Bay Stadium on Saturday. The result gave the Soweto Giants’ their 12th straight victory across competitions against the men from the coast.

Buoyed by their first victory of the season, the Buccaneers sought to build on the result from the past weekend with another win, but things weren’t to be as straightforward against a side that came into the fixture yet to concede from open play.

They enjoyed more of the possession in the opening ten minutes, but without coming close to breaking down the hosts’ defence.

The Chilli Boys edged in front in the 12 minute when Phakamani Mahlambi made a good run down the left flank before benefiting from an attempted clearance by Happy Jele which rebounded off Mahlambi and past an outstretched Siyabonga Mpontshane on the near post.

The goal was followed by another period of dominance by the Buccaneers, who were deprived of reasons to celebrate, despite attempts from Vincent Pule, who forced two saves out of Rashid Watenga halfway through the first half.

With the Soweto Giants camped inside the hosts’ territory, the breakthrough looked inevitable, and it came in the 29th minute when Pule’s attempted shot at goal landed in the path of Tshegofatso Mabasa, who made it two goals in as many matches with a sharp turn before shooting into the net from close range.

A strong finish to the first half from the hosts almost yielded a goal when Thokozani Sekotlong’s shot was cleared by Thulani Hlatshwayo, only for Mahlambi to collect the rebound and shoot just wide.

The half-time pep talk must have made a difference to the Buccaneers approach, as they would assert themselves on the opposition.

They took the lead for the first time in the contest after a brilliant counter in the 59th minute, started by Pule before second-half sub Terrence Dzvukamanja and Bandile Shandu both had crucial touches on the way to a brilliant finish from Abel Mabaso, who turned the ball past Watenga.

Pirates’ lead was protected at the other end by some good defence from Captain Happy Jele, as well as Shandu and Goodman Mosele, who lent a hand as Chippa continued to advance.

It was Mosele who took the game away from the hosts, finishing from another swift move forward as he brought up his second goal in Pirates colours in the 79th minute.

There were further chances for Pule towards the end of the contest, but 3-1 is how the scoreboard remained, with the Buccaneers climbing to the top of the log with more DStv Premiership action still to come this weekend.