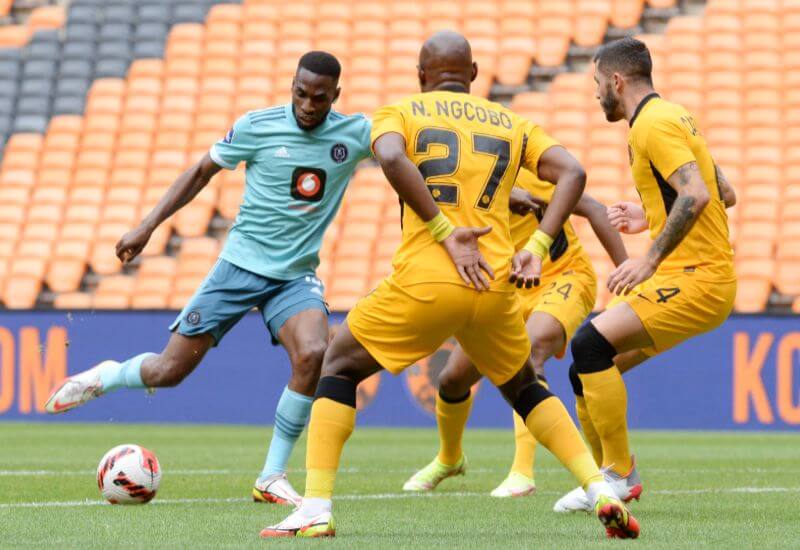 Orlando Pirates fell to a dramatic 2-1 defeat in their Soweto Derby clash against rivals Kaizer Chiefs at FNB Stadium on Saturday.

After their midweek assignments, the two Soweto Giants made a few changes to their starting XIs, with striker Kwame Peprah making his full debut for the Buccaneers, while midfielders Thabang Monare and Ntsako Neverdie Makhubela also got a start on the day.

Things were relatively subdued by Derby standards throughout the first half, with minimal clear-cut opportunities for both sides.

There was an opportunity for Peprah in the 11th minute, when he got on the end of a cross from Linda Mntambo but could not get enough on the ball, as the ball brushed off his head into safety.

Fortune Makaringe came just a few inches of a bit of luck five minutes later when he curled an in-swinging cross towards Daniel Akpeyi’s goal, only to be denied by the post.

Further chances fell to Makhubela, who could not win back possession after rattling Akpeyi, who had a tough time collecting a back-pass. Soon after, the Bucs midfielder forced an error from Cardoso before laying the ball for Peprah, whose shot was blocked by a sea of Chiefs jerseys inside the box.

The Buccaneers could have taken the lead at the stroke of half-time when Makaringe leapt high to meet a lovely cross from Makhubela, only to send his header narrowly wide.

There was a fast-paced start to second half, with Pirates making their way to Chiefs' territory, where Peprah came just inches away from his first Bucs goal after Akpeyi got enough fingertips on the ball to send it across the goalmouth.

Chiefs took the lead in the 48th minute after an error in the middle of the park from Thulani Hlatshwayo allowed Khama Billiat to find an unmarked Keegan Dolly, who shot calmly past Siyabonga Mpontshane.

In pursuit of the equaliser, Monare came close to levelling matters when his long-range shot went missed the target by a hair's breadth.

The hosts’ defence continued to hold its shape amid a barrage of attacks by the trailing Buccaneers, while Mpontshane was also called upon to make a few saves with the clock ticking.

The equaliser would come in the 87th minute through a bit of good fortune when second-half substitute Terrence Dzvukamanja forced a save off Akpeyi, who spilled the ball into the path of Mntambo who then sent the ball crashing into the back of the net.

Pirates’ joy was however short-lived as right on injury time, Chiefs were awarded a penalty after a tussle inside the box between Olisa Ndah and Khama Billiat.

Dolly stepped up to take the spot-kick and sent Mpontshane the wrong way, restoring his side’s advantage with barely any time remaining for the Buccaneers to launch a comeback.

It remained 2-1 as the final whistle sounded, with the Buccaneers falling on the losing side in the season’s first competitive Soweto Derby against Amakhosi.