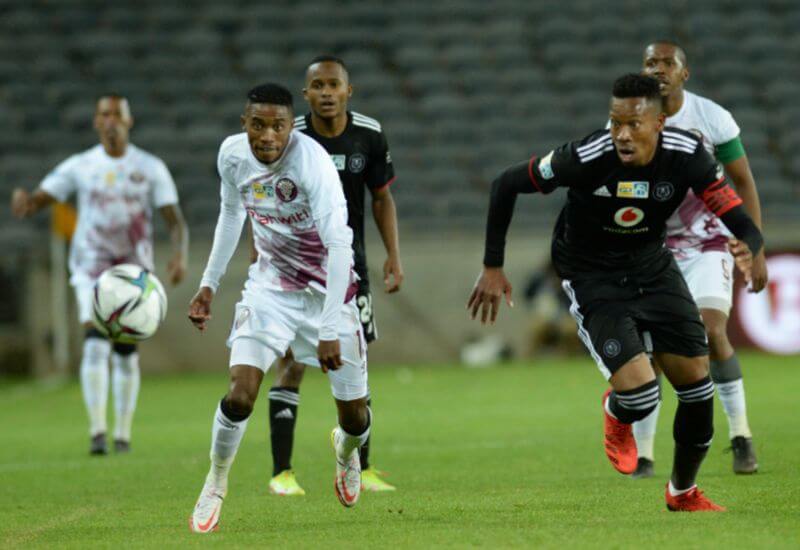 Orlando Pirates’ MTN8 title-defence ended on the first hurdle, following a 2-1 defeat to Swallows FC at Orlando Stadium on Saturday.

It was the battle of the oldest rivals in South African football, with the hosts in search of back-to-back titles, while the visitors returned to the competition for the first time since their 2012 triumph.

The first quarter of the game proved disastrous for the defending champions, who were made to dig deep after trailing by two goals early on.

Both Swallows goals came via Ruzaigh Gamildien, who beat Bucs keeper Richard Ofori with a well-taken free-kick to hand the lead to the Birds in the 16th minute. This was before he capitalised from some erratic defence in the 23rd minute, as the Ghanaian shot-stopper wandered off his line, allowing the 32-year-old to shoot into an open net.

Forced to chase the game, the Buccaneers pushed forward a few times and were handed a golden opportunity on the half-hour mark when Deon Hotto was hacked down inside the box by Swallows keeper, Virgil Vries.

The man who stepped up was Kabelo Dlamini, and the midfielder made no mistake from the spot as he placed the ball well out of the Namibian international’s reach.

The second half brought on the introduction of some fresh legs, with the debutant Bandile Shandu among the new faces.

The 27-year-old almost made an immediate impact, sending through a dangerous cross on the path of Deon Hotto, who was unable to make the crucial contact needed to make it 2-2.

Just after the hour mark, Vincent Pule found himself right in front of goal, but his back heel lacked the necessary power to trouble Vries.

Pirates continued to enjoy more of the possession in the second half, but despite a more dominant display, the equaliser continued to prove elusive as Swallows marched on into the semis.