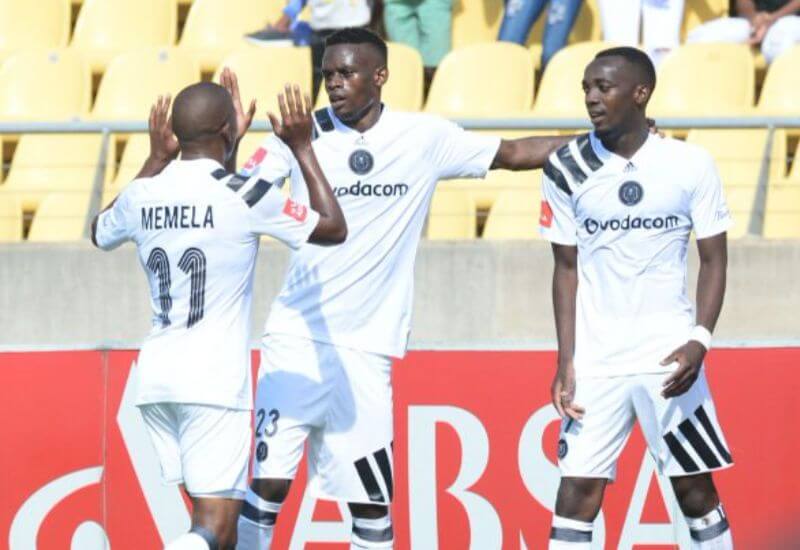 Goals on either side of the half from Justin Shonga and Thembinkosi Lorch saw the Buccaneers reduce their gap to five points off log leaders Mamelodi Sundowns.

The opening threat of the match came as early as the 3rd minute when striker Bonginkosi Ntuli forced a save out of Jackson Mabokgwane with a goal bound shot from inside the box.

Less than a minute later it would be the visitors who would find themselves with an opportunity to score after Luvuyo Memela played a ball across goal to an unmarked Lorch, who fluffed his opportunity by blasting his shot straight at the keeper.

Not long before the half hour, Pirates would take the lead following a pin point cross from Innocent Maela which found the head of Shonga at the near post.

The Soweto Giants had brilliant touches in Stars’ half and Musa Nyatama could only hit the side of the net from close range in the 41st minute.

Half time score 1-0 to Pirates.

The second half continued much in the same vein as the first with Pirates dominating play. The first real chance of the second stanza came in the 51st minute after a long range shot from Riyaad Norodien was almost bundled into the net by the Stars keeper, who recovered to push the threat out for a corner.

After the hour mark, coach Roger De Sa’s men fought hard to bag an equaliser but Mabokgwane was equal to the task to deny Zama Rambuwane from a dangerous free-kick.

Pirates were rewarded when Lorch made it 2-0 in the 72nd minute when he produced a fine finish in the box from a cross down the right flank.

The score line would remain unchanged and the Buccaneers would end up walking away with all three points to earn themselves their third win of 2018 and also the first against Dikwena since 2015.