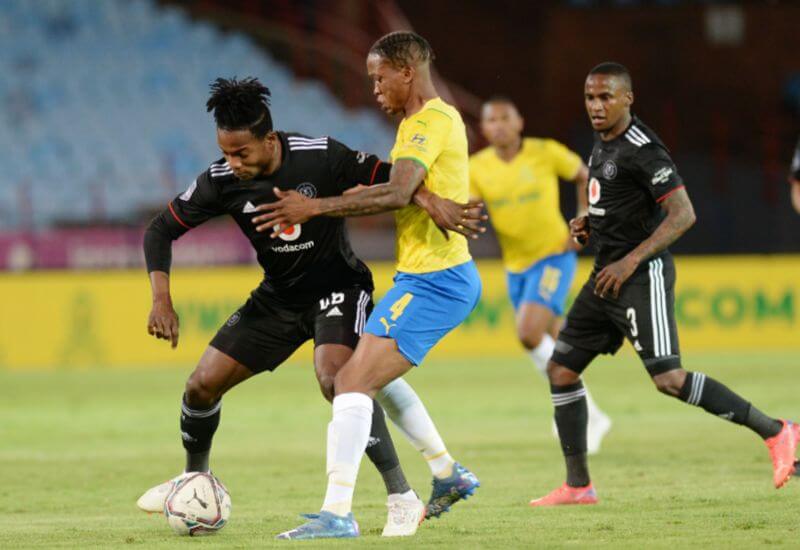 Orlando Pirates endured a forgettable night out at Loftus Versfeld, where they lost 4-1 to log-leaders Mamelodi Sundowns in their DSTV Premiership fixture on Friday night.

Emerging unbeaten from their last six outings, the visitors sought to upset the apple cart against a side yet to concede a defeat in the ongoing season.

An enterprising first half ended goalless, with no shots on target at either end.

However, it wasn’t without a few close calls, as Thapelo Morena almost stunned the Bucs defence in the third minute with a volley that sailed over the crossbar.

This was moments before Deon Hotto responded with a threatening effort of his own at the other end, but skewed his final shot which went well wide of the target.

Ten minutes from the break, Peter Shalulile had a shot at the Bucs goal, but a timely intervention from Bandile Shandu ensured that it remained 0-0 as he deflected the ball out for a corner.

What was a physical first half ended with each side losing a key member of their personal to injury, with Olisa Ndah failing to emerge from the tunnel for the visitors, while the hosts lost Grant Kekana who was stretchered off moments before the halftime whistle.

While opportunities at goal were rare throughout the duration of the first half, it only took Sundowns five minutes to edge ahead in the second as Themba Zwane poked one into the back of the net from close range from a free-kick delivered by Lyle Lakay.

Set-pieces continued to be the visitors’ detriment, with Pavol Safranko finding the hosts’ second with a header from a free-kick after leaping high to beat the Bucs defence.

A nightmarish evening continued for Pirates, who found themselves three down as Safranko completed his brace after pouncing on a loose ball resulting from an initial save from Mpontshane.

This was before another set-piece yielded another strike for the home side, with Lakay again finding Shalulile from a dead-ball situation for the fourth goal of the night.

By then, Pirates’ search for parity had turned to one for a consolation goal, and that came with the final action of the contest when Fortune Makaringe’s screamer from outside the box made it 4-1.

In the end, it was the home side’s night, with the Buccaneers condemned to their worst defeat of the season.