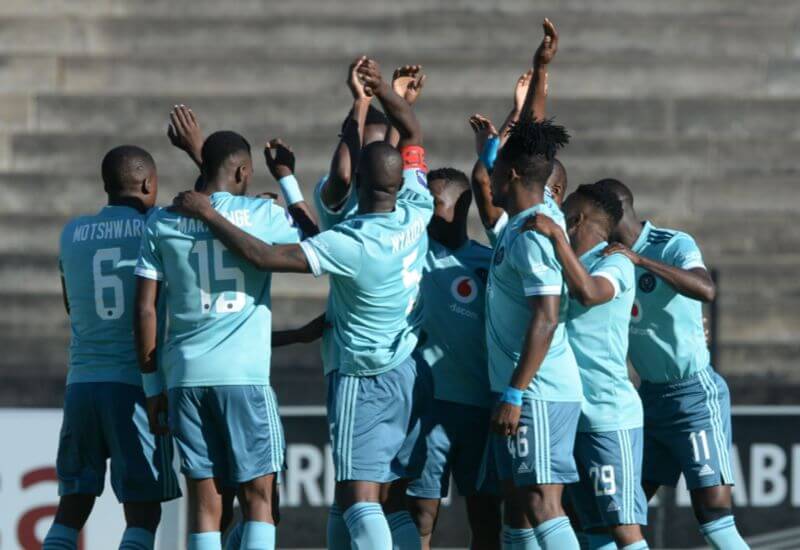 Orlando Pirates have one foot in the CAF Confederation Cup group stage after claiming a 2-0 victory in their away leg of their Additional Preliminary Round tie against Liberia’s LPRC Oilers on Sunday evening.

Pirates were drawn against the Liberian champions for what is the final preliminary round, and were tasked with trekking up north to the Samuel Kanyon Doe Sports Complex in Paynesville for the first leg of the tie.

The Buccaneers first had to contend with a spirited performance from the hosts, who were the quickest off the blocks with Irvin Gbote and Kelvin Nokuwa causing problems for the defence early on.

They grew into the game midway through the first half, as Terrence Dzvukamanja went just inches off-target as he smashed his shot into the crossbar after receiving an accurate pass from Linda Mntambo. The rebound fell kindly to another Pirates player in Tshegofatso Mabasa, whose effort went just wide of the target.

The hosts continued to ask questions at the other end, and had a golden opportunity to take the lead when they were awarded a penalty in the 45th minute.

Captain Ebenezer Solo stepped up, but launched the ball over the crossbar into the stands.

Moments after the let-off, the Buccaneers set about punishing the Liberians, with Dzvukamanja and Mabasa connecting well before the latter finished calmly from close range.

The hosts began the second half as they started the first, causing trouble for the Bucs defence, but Mpontshane was largely untroubled as he was called upon to make some relatively comfortable saves early on.

Pirates could have pulled further ahead just after the hour mark when Mntambo was set up for a tap-in, but was let down by his first touch.

Mpontshane was made to sweat just eight minutes from the final whistle when Oilers broke into a counter, forcing the Bucs shot-stopper into a fine save as he dove low into his right to keep out a goal bound shot from Gbote.

While Pirates spent the closing minutes of the fixture defending a potential equaliser, they had opportunities at the other end, and the most decisive of them all came in injury time when Bongani Sam chipped a cross towards Fortune Makaringe, who headed in to make it 2-0.

That was the last real action of the game, with the Buccaneers returning home with a healthy advantage ahead of the second leg at Orlando Stadium.