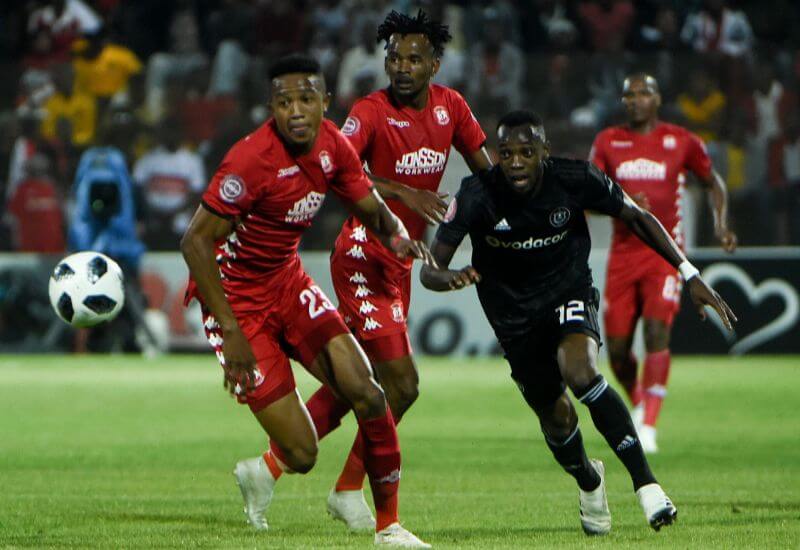 Orlando Pirates dropped valuable points as they played out to a hard fought 2-all draw with Highlands Park at a packed Makhulong Stadium on Saturday night.

With this draw, the Buccaneers fall to five points behind log leaders Bidvest Wits who won their match against Free State Stars earlier in the day.

Pirates offered the first threat on goal as early as the eighth minute, with Vincent Pule showing some fine footwork to open space for a low shot from a tight angle, but goalkeeper Marlon Heugh did well to smother the effort.

Highlands almost claimed the lead in the 18th minute when Peter Shalulile found Tendai Ndoro with a good cross – the former Bucs striker saw his effort saved by Siyabonga Mpontshane, before Innocent Maela cleared the loose ball off the goal line.

The Lions of the North continued to look dangerous in attack through the first half, with Mpontshane denying Sphiwe Mahlangu twice on either side of a great chance for Mlungisi Mbunjana on 35 minutes, which saw the midfielder shoot wide from close range.

The Buccaneers weathered the storm from the hosts to head into halftime with the score level at 0-0.

Pirates hit the woodwork early in the second half, with Maela’s cross from the left deflecting off a defender and rebounding off the face of the crossbar, while Abbubaker Mobara was unable to take advantage of the subsequent loose ball.

Highlands then claimed the lead in the 59th minute when Mahlangu provided a superb low finish from the right side of the penalty area. Pirates were behind for only a moment as they immediately carved up the hosts’ defence before Thembinkosi Lorch fired home from close range to make it 1-1 on the hour mark.

The home side went back in front midway through the second half, and this time Mahlangu turned provider. His excellent pass put Shalulile in on goal and the forward picked up a favourable bounce in a challenge with the Mpontshane before doing well to keep his feet and tap the ball home on the turn.

Bucs looked to mount a comeback in the final phase of the game and used the bench to try and change the momentum, introducing attackers Kudakwashi Mahachi and Thamsanqa Gabuza.

The substitution proved inspired as both me. were involved in levelling the game at 2-2 in the 81st minute. Gabuza was a powerful presence in the middle of the penalty area which caused Heugh to drop a cross from the left and Mahachi provided a fine finish from the loose ball to restore parity.

The visitors pressed on in search of a late winner but unfortunately that was not to be as the referee called the game after four minutes of optional time to end what was indeed one of the tussles of the season.

Next up for the Buccaneers is a home clash against Chippa United.