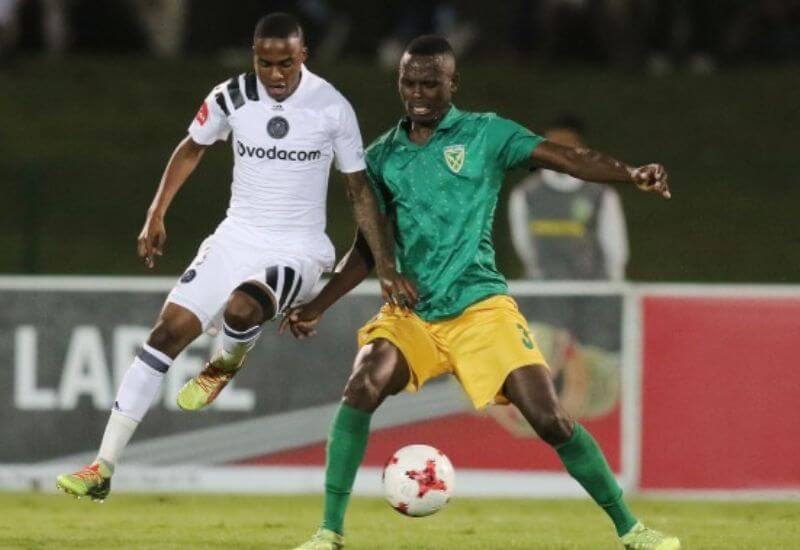 Orlando Pirates have bounced back to winning ways with a hard fought 2-1 win over Golden Arrows on Saturday night.

The Buccaneers, who were disappointingly dumped out of the Nedbank Cup on Wednesday, secured their three points courtesy of goals from Thembinkosi Lorch and Mthokozisi Dube.

With this win, the Buccaneers have reduced the gap between themselves and log leaders Mamelodi Sundowns to one point.

Vince Lombardi once said, 'The greatest test of character is not in never falling but in rising again after falling'. All eyes were on Orlando Pirates on Saturday evening to see whether they would be able to shake off their loss against City and have the mental strength to overcome the challenge of Abafana Be'sthende.

Milutin Sredojevic’s men made their intentions known as they dominated possession from the start.

The first notable action occurred midway through the first half, when Pirates had a strong shout for a penalty waved away by the referee.

Justin Shonga sprung the offside trap and looked to have given Dube an easy tap-in opportunity but the flying wing back appeared to have been been fouled by Zolani Nkombelo and the ball passed harmlessly across the face of goal.

Just before the half-hour mark, Arrows should have claimed the lead. A cleverly worked set-piece saw Siphelele Magubane gift Danny Venter a clear sight of goal in the penalty area, but the winger blasted his shot over the target.

The visitors came back from the half time break the better side and it showed when it took them less than three minutes to find the opening goal of the match through Lorch who was on the end of a delightful pass from Man of the Match Musa Nyatama.

A bit of controversy followed in the 53rd minute when the referee Thando Ndandzeka‬ red carded the wrong player after a foul on Luvuyo Memela.

Right back Mzava was shown his second yellow card and subsequently sent off while Mzwandile Buthelezi stayed on to complete the game.

Smelling blood, Orlando Pirates kicked into overdrive in search of the crucial second goal and they were duly rewarded for their efforts in the 70th minute albeit fortuitously, when a failed clearance rebounded off Dube and into the back of the net.

At this point it looked like the match would get easier for the Buccaneers but with less than eight minutes to go a goal from Jabulani Shongwe made for an uncomfortable last couple of minutes for the Ghost who were the majority at the Princess Magogo Stadium.

Abafana Be'sthende almost found the equaliser late on in the match when a failed clearance in the box was almost pounced on by Musa Bilankulu but the defender failed to make proper contact with the loose ball much to the relief of the Bucs defence.

The home side continued to pile the pressure up front but the resilient Buccaneers held firm until the very end.