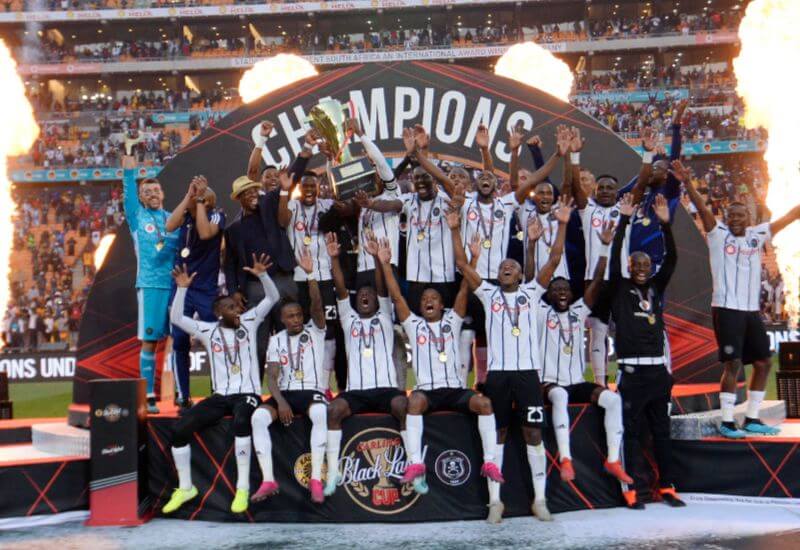 Orlando Pirates claimed the early bragging rights of the Soweto Derby when they defeated their perennial rivals Kaizer Chiefs 2-0 at the FNB Stadium on Saturday afternoon.

Two first half goals from Augustine Mulenga and the red-hot Thembinkosi Lorch were enough to hand the Mighty Buccaneers their fifth Carling Black Label Cup trophy.

The first goal came by way of an unforced error from the Chiefs defence in the 18th minute. Goalkeeper Bruce Bvuma’s attempt at a short pass was intercepted and Lorch pounced on the loose ball but struck the bar with his first shot – then Mulenga reacted quickest to slot in the rebound.

Amakhosi should have pulled one back shortly afterwards after Ramahlwe Mphahlele played a well weighted pass across goal for Lazarous Kambole but the Zambian fired his shot over the bar with the keeper at his mercy.

The Buccaneers soon made it 2-0 as they made the opposition pay for that missed opportunity.

Footballer of the Season Thembinkosi Lorch cut inside from the left flank and curled a beautiful long-range shot beyond the reach of Bvuma on the half hour mark.

With the goals already in the bag, the Buccaneers opted for a more structured approach as they tried to absorb the pressure from Chiefs.

The teams made numerous substitutions to allow some of the new signings to experience the hype of the derby and to showcase themselves in front of the supporters.

Fortune Makaringe, Bongani Sam and Gabadinho Mhango came in for the Buccaneers for the first time.

The Amakhosi did manage to pile on some pressure in the final minutes but the Buccaneers remained resolute at the back. And whenever Chiefs did get through, goalkeeper Wayne Sandilands was on hand to deny Amakhosi any consolation.