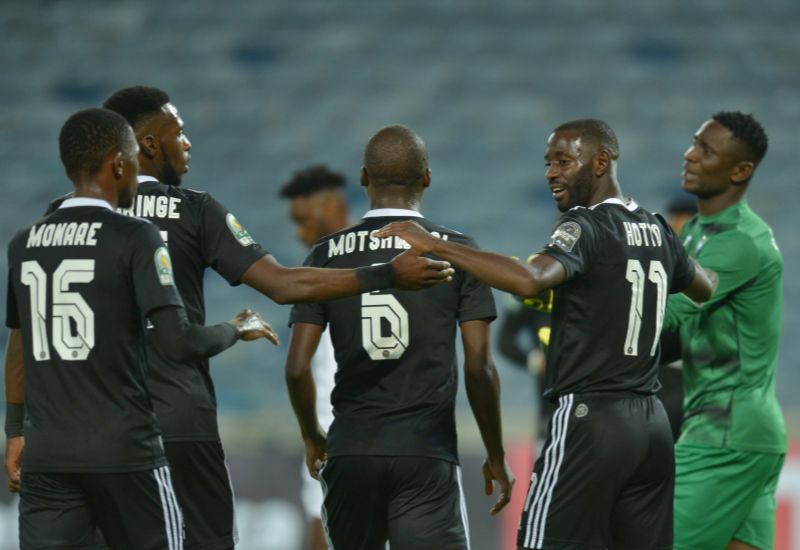 Having collected an away point in their group opener, the Buccaneers were looking to go for all three on home soil.

The intent was clear from the go, as they dominated possession earlier on, camping inside the visitors' half for the best part of the opening exchanges.

Reward almost fell to Ntsikelelo Nyauza, who had a clear chance to go for goal from close range in the 19th minute, but was repossessed at a crucial moment while fixing to shoot.

Eight minutes later, the Soweto Giants had reason to celebrate as Linda Mntambo gathered a rebound from a parry from the keeper, and had the presence of mind to opt against going for goal when the chance beckoned.

Instead, "Figo" guided the ball with his head towards Deon Hotto, who too showed great composure as he used his backheel to guide it into the net.

Going behind seemed to have spurred the visitors on, as they launched attack after attack in search of the equaliser.

That came from the penalty spot after Siyabonga Mpontshane was adjudged to have committed a foul inside the box.

The Aba Giants' skipper, Augustine Oladapo stepped up, and made no mistake on the stroke of halftime.

Having lost the lead, the hosts had to dig deep in the second half, which they began the same way they did the first - controlling possession and doing most of the playing in the opposition half.

Ten minutes after the break, Vincent Pule was set up by Hotto before unleashing a fine shot, which forced an equally impressive save from John Noble.

With under 20 minutes until the final whistle, second-half substitute Gabadinho Mhango won a penalty for the Buccaneers, as he was brought down inside the box.

Another sub in Tshegofatso Mabasa stood over the ball, but the ensuing spot-kick was disastrous, as the wet underfoot conditions had the final say, with the striker losing his footing to send the ball well over the bar.

The 24-year-old, however, turned out to be the hero on the night right on the final whistle, making a sharp run inside the box to lose his marker before heading in at the near post to make it 2-1.

This capped a spirited performance from the hosts, who claimed their first victory of the Group stage to go top of the standings.