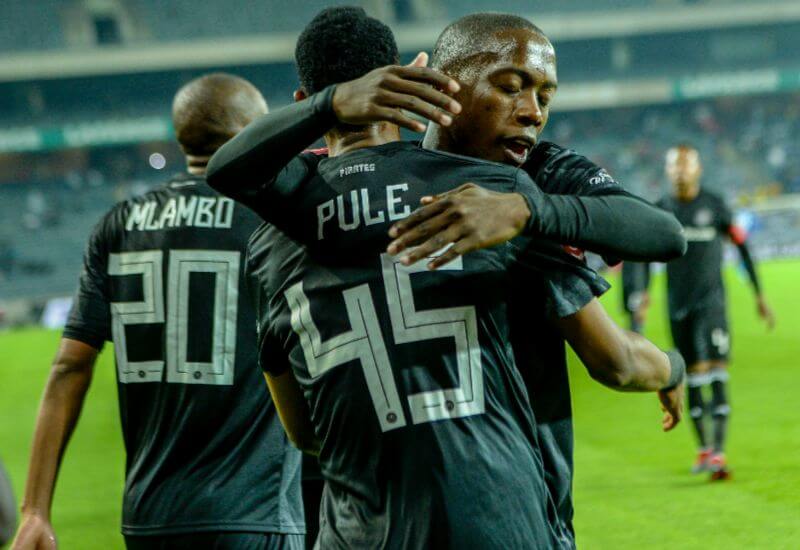 Orlando Pirates have moved to third in the Absa Premiership following their emphatic 3-1 victory over SuperSport United at the Orlando Stadium tonight.

Earlier in the day we witnessed the Springboks defeat New Zealand 36-34 in Wellington to earn their first win over the All Blacks since 2014. One could be forgiven to expect another hoodoo to be broken at the Mecca of South African football – the Orlando Stadium, where the Mighty Buccaneers played host to Matsatsantsa a Pitori, a side they’ve failed to beat since 2015.

Last season the two sides couldn’t be separated as they played to two goalless draws however the hosts signaled their intentions as early as the 15th minute with Vincent Pule opening the scoring with a diving header following a cross from Augustine Mulenga.

The Matsantsantsa bench made an early change by taking off the usually dangerous Thuso Phala for King. United began to claw their way back into the game soon after that change.

Grobler was at it again on two occasions: first from a looping header which forced a good diving save from Mphontshane and the next one towards the end of the half where he blew a goal scoring opportunity by sending his shot over the bar with the keeper at his mercy.

Matsatsantsa may have ended the first half on top in terms of momentum, but it was the Buccaneers who held the advantage.

The second half started very much in the same fashion as the first, with momentum shifting from side to side but as the match progressed it was United who looked to be creating the better chances.

They finally found the equaliser in the 69th minute with Bongani Khumalo getting on the end of an Aubrey Modiba cross.

Bucs responded by sending on Justin Shonga and ThembinkosiLorch in attack and their aggression soon paid dividends. Xola Mlambo created space for Lorch on the edge of the box with some crafty play and the substitute beat Ronwen Williams at his near post with a powerful low drive to make it 2-1 in the 82nd minute.

Five minutes later the hosts extended their advantage to 3-1, with Mulenga providing a low cross for Ben Motshwari – his initial effort was saved by Williams, but the ball rebounded kindly for the midfielder to force it home at the second attempt.