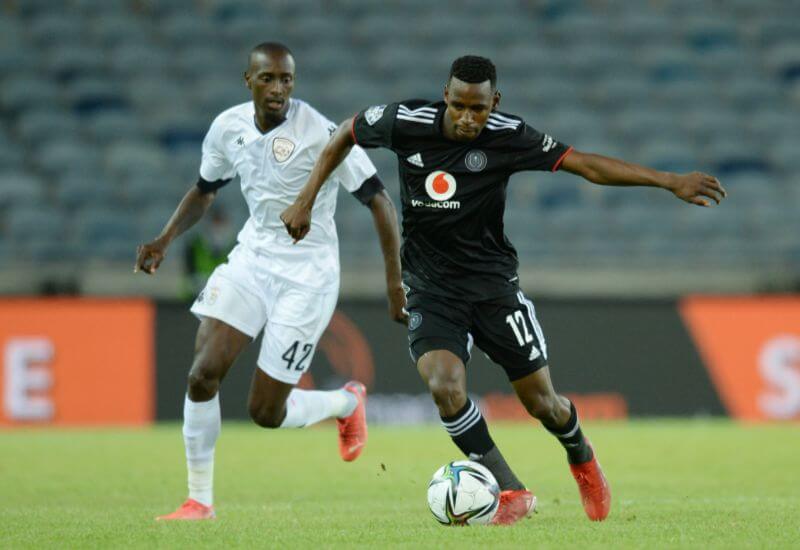 Orlando Pirates had to dig deep in order to come from behind and defeat Sekhukhune United, completing a 2-1 victory at Orlando Stadium on Tuesday.

Having been a bit out of sorts in the league of late, the Buccaneers needed to turn the tide, but knew that would not come easy against a side coming into the game on the back of three straight victories.

It was the hosts who started well, pinning the visitors into their own half, but without capitalising on their early advantage.

One of the early opportunities fell to Tshegofatso Mabasa, who went for goal from outside the box, only for his shot to be easily snapped up by Toaster Nsabata.

Soon after that, Nsabata was called upon to make another save, this time from the boot of his own teammates when Bandile Shandu’s low shot across the face of goal was deflected towards the target by Nyiko Mobbie, with the Zambian shot-stopper well-positioned to make a crucial save.

Pirates continued to push forward, and could have taken the lead in the 30th minute when Collins Makgaka went for a spectacular finish from the edge of the box, but an unlucky deflection kept the ball out with Nsabata beaten.

The Buccaneers were made to rue not converting their opportunities when Seth Parusnath got on the end of a pass from Chibuike Ohizu before shooting past Siyabonga Mpontshane to open the scoring in the 41st minute.

The opening exchanges of the second half were characterised by the hosts continuing to enjoy most of the possession, but failing to penetrate the visitors’ who continued to keep numbers behind the ball.

A piece of good fortune opened the door ever-so-slightly for the home team, who were awarded a penalty after Ryan de Jongh failed to tuck away his hands, which met a cross from Paseka Mako in the 75th minute.

Mntambo stepped up from the spot, and calmly slotted home for his second goal in as many matches, sending Nsabata the wrong way to draw level.

That proved to be an inspired period for the Buccaneers, who were in the lead just a minute later when second-half substitute Kabelo Dlamini collected the ball at the edge of the box with enough time to compose himself for what was  a stunning strike into the far corner.

Another man introduced in the second 45 minutes, Kwame Peprah could have made it three goals for Pirates inside ten minutes, when he went for goal from a tight angle, only for his shot to be palmed away by Nsabata.

The home side continued to pull the string and had a last-gasp opportunity when Terrence Dzvukamanja was played in by Hotto, but managed to send his shot crashing into the crossbar. This was before Thulani Hlatshwayo gathered the ball some distance out, with his venomous shot finding its way straight to the keeper.

In the end, Pirates’ spirit prevailed, as they collected all points on offer to climb to sixth place in the DStv Premiership standings.