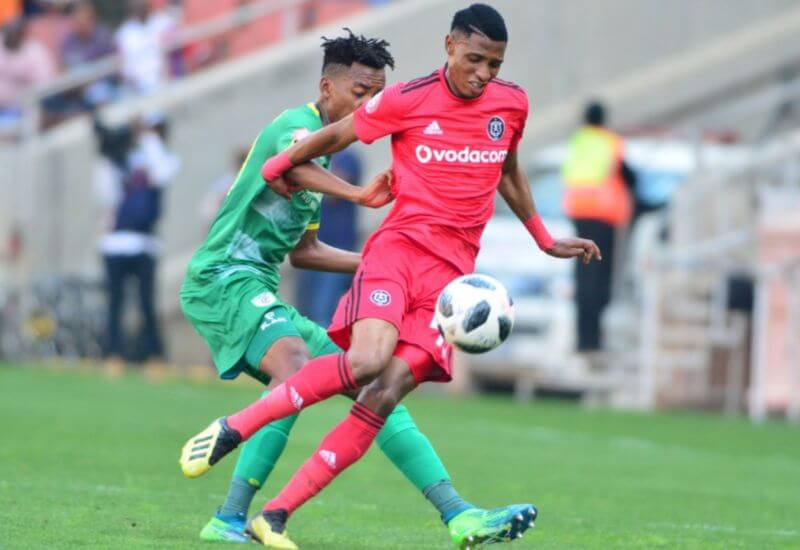 First half goals from Vincent Pule and Thembinkosi Lorch were enough to see Orlando Pirates secure a 2-1 victory over Baroka FC in an Absa Premiership clash played at the New Peter Mokaba Stadium on Saturday afternoon.

Pirates went ahead with two first half goals from Lorch and Pule before the hosts replied with a goal of their own in the second half to set up a second nervy ending in as many matches for the Buccaneers. Fortunately this time around the visitors were able to hold on to their lead and avoid a classic case of déjà vu.

The visitors started the match in similar fashion to the game against Cape Town City. They dominated proceedings from kick off and quickly signalled their intentions with their first chance of the match coming in the 9th minute after Augustine Mulenga was presented with a clear shooting chance after being released on goal by Pule, but his shot was thwarted by Baroka’s goalkeeper Elvis Chipezeze.

Pirates continued to ask questions of the Baroka defence but Chipezeze was always on hand to deny the Sea Robbers that crucial opening goal. Lorch came close in the 24th minute but his shot on the edge of the box shaved the upright much to the relief of the Baroka goal minder.

The visitors were finally rewarded for their persistence seven minutes later, this time it was Pule to test the Baroka keeper .The 26 year old unleashed a scorcher into the back of the net to put his side in front.

Goal scorer Pule turned provider in the 38th minute when his long pass into the box caused confusion for the Baroka defence, leaving Lorch to round the keeper and tap in Bucs' second of the match.

Enterprising football was on display for the remainder of the half but the Buccaneers were unable to add to their two goal advantage.

Half time 2-0 to the visitors.

Just as the New Peter Mokaba Stadium were expecting more champagne football to flow in the second half, they were left hugely disappointed as Micho Sredojevic's soldiers produced yet another flat second half performance.

Baroka almost pulled one back as early as three minutes after the restart, with midfielder Mduduzi Mdantsanesending a volleyed effort just wide of Siyabonga Mpontshane’sleft-hand upright.

Pirates were counting their lucky stars in the 58th minute when an unmarked Makgantai ballooned his shot over the bar with Mphontshane at his mercy.

It was all one-way traffic in the second in favour of Bakgaga but they were being let down by poor finishing – that, until the 79th minute. Substitute Makgantai was unmarked in box and this time he made sure to keep his shot on target.

The home side almost found the equaliser late in the game but the Baroka attackers failed to tap in the cutback. That would be their last real chance of the match as Pirates held on to secure all three points.

The Kweps of the Learning Centre