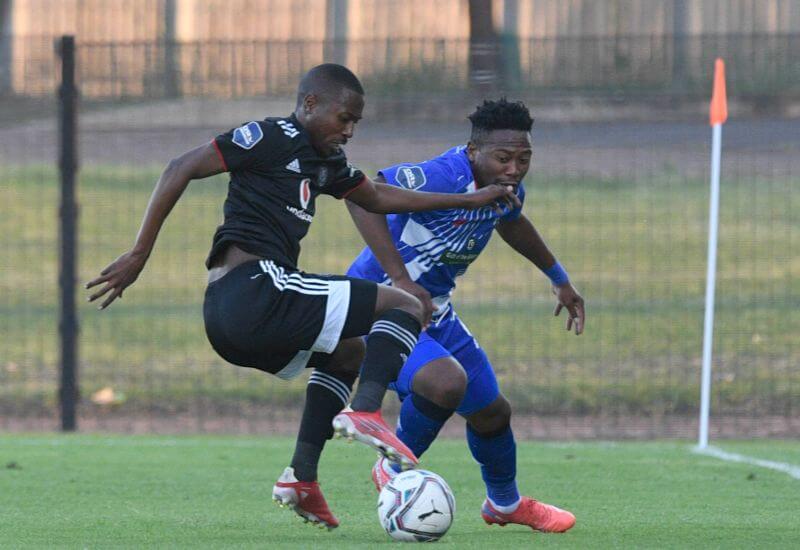 Orlando Pirates were held to a goalless draw by a ten-man Maritzburg United on their return to the DSTV Premiership at Harry Gwala Stadium on Wednesday.

In what was the second of three matches in the space of 10 days for the visiting team, the technical team rang the changes, with Linda Mntambo and Thabang Monare both brought on in the midfield

The opening exchanges were concentrated in the middle of the park, with the Buccaneers enjoying some territorial dominance without penetrating the final third.

The subdued start was offset in the 16th minute by Mntambo, who threaded a fine pass to release Tshegofatso Mabasa inside the box, but the Bucs striker’s shot was blocked by Marcel Engelhardt.

This signaled the start of intense pressure inflicted by Pirates on the hosts, with “Figo” in the thick of the action, as he was next to force a save out of the Maritzburg shot-stopper by driving a shot through from the edge of the box in the 20th minute.

Out wide, Bongani Sam and Bandile Shandu added to the threat, as they stretched the hosts’ defence.

Meanwhile, Mntambo continued to trouble the home side, popping up at either flank to first delivering a cross towards Monare who shot just wide of the target, then finding Terrence Dzvukamanja, who also misdirected his effort at goal.

The hosts emerged from the tunnel more assured on attack, and Pirates could have trailed in the 51st minute if it wasn’t for Paseka Mako putting his body on the line to stop a marauding Amadou Soukona inside the box.

Pirates were handed a numerical advantage in the 67th minute, with Maritzburg midfielder Brandon Theron given his marching orders for a dangerous tackle on Monare.

Despite being a man short, the Team of Choice kept their shape on defence amid relentless attack from the Soweto Giants, who were forced to try their luck from range.

Fortune Makaringe was one of the players who tried their hand from a fair distance, unleashing a stinging right-footer which was parried away by Engelhardt in the 68th minute. This was before he opted for finesse over power the next time around, curling one towards the top corner seven minutes later, only to watch the ball sail just inches from the target.

The Buccaneers’ search for the winner continued to be met by a fine defensive effort from the home side, who were the happier of the two sides as spoils were shared in the end.