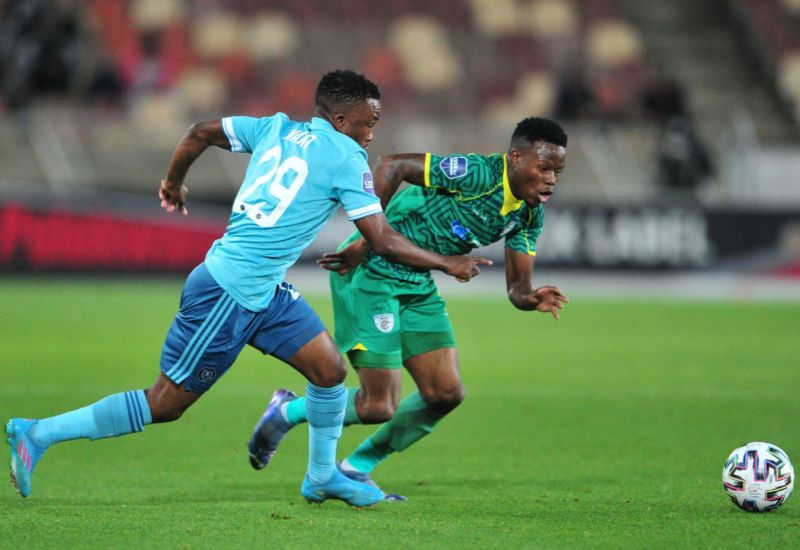 Orlando Pirates earned a point from their midweek fixture away to Baroka, which ended in a goalless draw at Peter Mokaba Stadium on Tuesday night.

With the home side looking to escape the relegation zone, the visitors had the opportunity to climb as high as third place in the standings by collecting their third league win in a row.

The Bucs fans who had showed up at the venue were made to wait for their team’s first real chances at goal, with the hosts first to create some excitement when Marlon Kambala forced a diving save from Richard Ofori five minutes in.

It took a while for the visitors to grow into the contest, and they had an opportunity in the 22nd minute when Siphesihle Ndlovu sent his shot just wide after some good touches from Goodman Mosele and Deon Hotto out wide.

Baroka could have made Pirates rue that missed opportunity three minutes after, but Sekela Sithole’s free header from a corner kick went nowhere near the target.

Mosele had the ball in the back of the net just before the half-hour mark when he tapped in after collecting the rebound after Hotto forced a save from Masuluke from a dead-ball situation, but his joy was short-lived as the offside flag went up immediately.

A busy first half continued for Hotto, who cut inside from the left as the Soweto Giants remained camped inside the home side’s half, before his right-footed shot was deflected out of play.

Baroka started the second half much like they started the first, getting the early chances, with Ofori forced into two saves in quick succession.

The visitors came close through second-half substitute, Wayde Jooste on the 67th minute, as he darted past the defence right on the edge of the box, only to shoot just inches wide.

There was an interruption late in the second half when the floodlights failed, forcing an extra 11 minutes added onto the contest.

However, the game would end with some major concern in the Pirates camp, with defender Paseka Mako suffering a sickening blow after a collision with Ofori.

It was not the finish either side would have wanted, and the final whistle sounded to confirm a goalless draw.