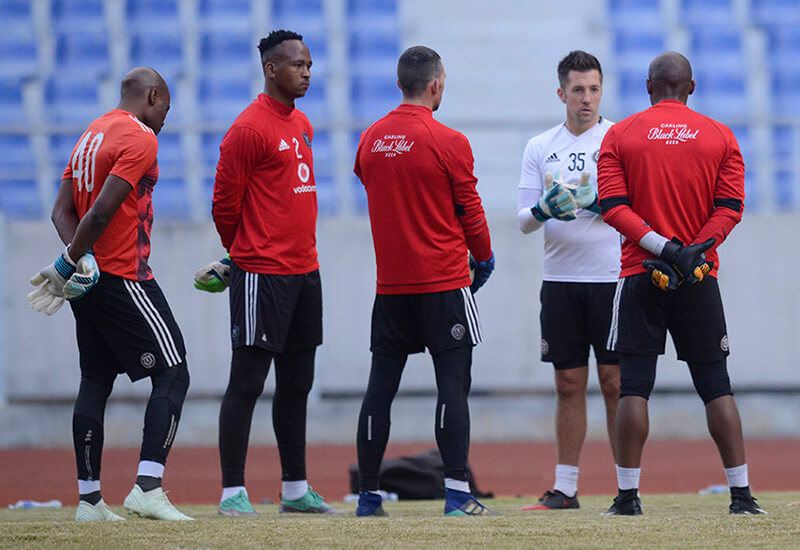 It will be a collision of giants when Orlando Pirates take on TP Mazembe this afternoon in a friendly match in Ndola. The Congolese side finished second in their domestic league and are currently participating in the CAF Champions League.

Newly appointed coach Andrew Sparkes understands how crucial his goalkeeping department’s contribution in the upcoming season will be, and is relishing the opportunity get his feet wet against a side where club goalkeeping legend has been written. It was against the very same TP Mazembe where the late Senzo Meyiwa saved two penalties to see the Bucs advance to the latter stages of the CAF Champions League in 2013.

Speaking to Orlandopiratesfc.com, Sparkes outlined the preparations and expected outcomes ahead of the first real test.

“In any relationship, the starting point is in getting to know each other. We needed to understand the expectations and also what we want to achieve as a unit. with that in mind, my starting point was to see where the goalkeepers were last season, to analyse all of the them and see how they performed and try to identify their strengths and other areas we can improve upon for the upcoming season.

“The first two weeks of pre-season was a lot of hard work at training due to a lack of game time but we identified and worked on certain areas that I want them to excel in. We have done a lot of analysis of our training sessions as well, and this will be crucial in order to improve.”

ON INITIAL ANALYSIS OF THE KEEPERS

“I did a lot of analysis before joining the Club so I had an in-depth understanding of how our ‘keepers react tactically in certain situations. There is a big responsibility that they caring as the last line of defence and our immediate expectation is for them to do better than last season, even if it’s by one game more. The plan is based around where they are now, relative to where we want them to be, and the level we believe they can be at as Orlando Pirates goalkeepers.”

“We have an experienced bunch of guys who have all have played in the PSL and that bodes well for the Club.”

“For me the importance of this game is to see if the goalkeepers can implement some of the things we’ve done at training. We’ll have a tough season of back-to-back games so there’ll be very little turnaround time between training and matches. The result will be important from the perspective of getting a winning mentality, but for the pre-season games I’ll be first and foremost looking at the individual performances of the goalkeepers and how they can help the team perform.”

“The most important thing is the start of the season and whoever takes that number one jersey needs to be ready. They are already competing for spots for that first league game so it will be interesting to see who steps up and performs in the pre-season games and training, and shows that they deserve the jersey.”