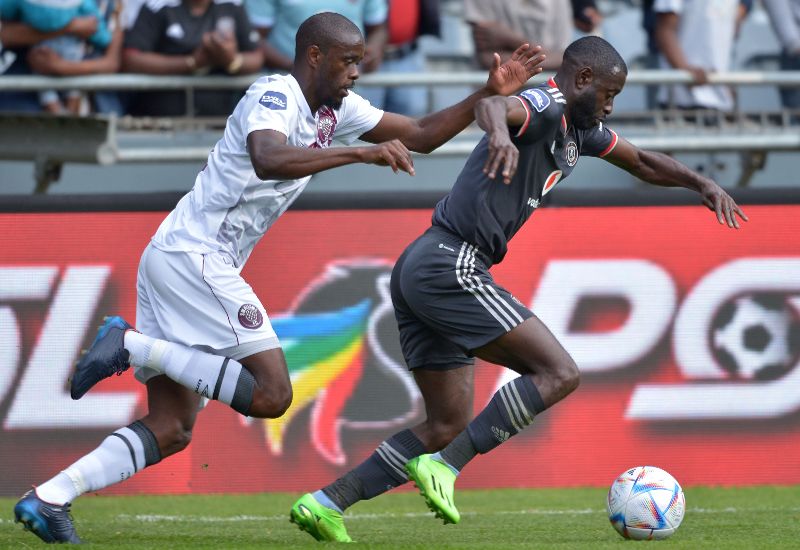 Orlando Pirates picked up an important three points in their 2022/23 season opener, as they beat rivals Swallows 1-0 at Orlando Stadium on Saturday afternoon.

Three debutants in Nkosinathi Sibisi, Tapelo Xoki and Bienvenu Eva Nga were among the starters as Coach Jose Riviero took charge of his first match for the Buccaneers.

It was through one of the new men where the hosts got their first sniff at goal, as Eva Nga ran into an inch-perfect pass from Kabelo Dlamini before sending his shot wide of the near post six minutes in.

That very same combination only had to wait a further four minutes  before reaping the rewards of their connection, as Dlamini found himself having to work extra hard on the edge of the box before he could free himself to locate the Cameroonian striker, who made no mistake in guiding the ball past keeper, Thakasani Mbanjwa for the opening goal.

Sibisi almost put his name on the scoresheet in the 16th minute, as he found himself unmarked inside the box following a set-piece, but sent a tame shot towards goal, which was dealt with comfortably by Mbanjwa.

The Buccaneers continued to control proceedings, forcing a succession of set-pieces which they were unable to capitalise from.

They were almost left to rue the missed chances towards the end of the first half when Junaid Sait headed towards goal from a set-piece, sending his effort wide.

New skipper Innocent Maela could have helped widen the gap between the two sides on the stroke of halftime as he marauded down the left flank, overlapping behind the defence before failing to connect with either one of Thembinkosi Lorch and Eva Nga, who were both waiting inside the box.

Their  slim advantage almost evaporated inside the opening moments of the second half, with Tshediso Patjie getting oodles of space, only to hook his shot wide.

The game’s next opportunity fell to Eva Nga, who was right on the edge of the penalty area in the 53rd minute when his connection with the ball failed to trouble Mbanjwa.

Bucs keeper Richard Ofori was kept busy by shots from Patjie and Lindokuhle Mtshali midway through the second half, but stood up well to the challenge.

Inbetween those two chances, Eva Nga could have completed a brace on debut when he was teed up by Lorch after a swift counter from the Buccaneers before directing his shot wide of the target.

Patjie and Ofori continued their grand battle minutes away from the full-time whistle, with the Bucs shot-stopper continuing to get the better of the Birds attacker.

Second-half substitute Fortune Makaringe almost had the final say when he found himself with an opportunity to shoot at goal in the closing moments, but a deflection directed his effort away from the target.

With all the Bucs’ dominance throughout the 90 minutes, it remained 1-0 as the final whistle sounded, with the home side picking up a vital three points to get their campaign underway.