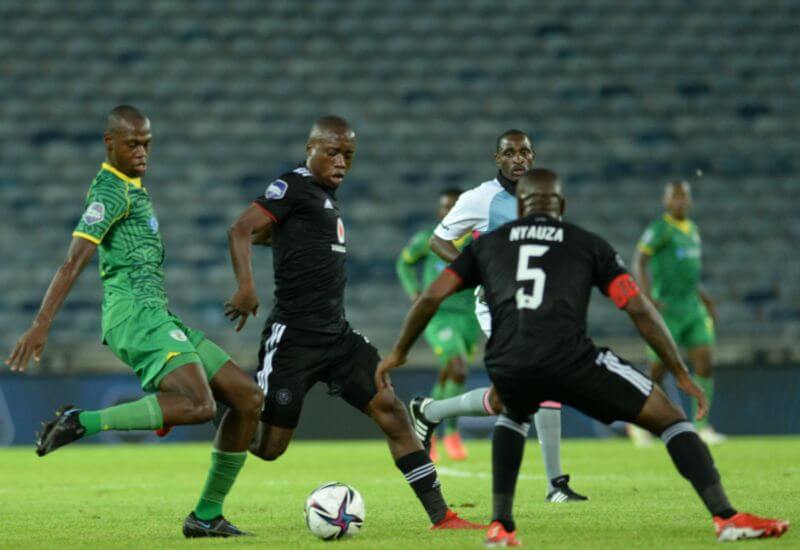 Orlando Pirates were forced to settle for a goalless draw by a stubborn Baroka at Orlando Stadium on Thursday night.

Following a slight delay in proceedings, league football finally returned to the iconic Soweto venue, where the Buccaneers had not set foot after a month on the road.

With the hosts immediately taking up residence inside the visitors’ half there was an early opportunity for Fortune Makaringe, whose powerful shot from just outside the box forced Oscarine Masuluke into a desperate save.

An even closer shot at taking the lead fell to Deon Hotto in the 17th minute as the midfielder managed to direct the ball past the Baroka shot-stopper, only to be let down by his final touch.

Pirates continued to dominate both possession and territory, but without much in the way of clear-cut chances.

Ben Motshwari almost created something out of nothing midway through first half when he collected a loose ball from outside the box, sending a stinging shot straight to the gloves of Masuluke, who parried the ball out of play.

Just on the 30-minute mark, Peprah came close to opening his Orlando Pirates account with a header after combining with Makaringe, but sent his header over the bar.

There was another close call courtesy of Motshwari's boot with the halftime clock ticking down, but the hosts headed to the tunnel with not much to show for their dominance in the opening 45 minutes.

Baroka, who were starved of opportunities in the first half, almost took the lead seven minutes after the break when a seemingly tame delivery into the Pirates box almost snuck into the top corner, with Siyabonga Mpontshane beaten.

The game descended into a bit of a lull in the middle part of the second half, as the visitors did well to keep their defensive shape, not allowing the home side any chances to shoot.

The theme continued as the game advanced, with second-half substitute Tshegofatso Mabasa dispossessed just outside the penalty area just as he got on the end of a quick break from the Buccaneers.

Seven minutes before the final whistle, Bakgakga got close to stealing the three points, when Sekela Sithole found space behind the Pirates defence, only to shoot well wide of the target.

The hosts had a last-gasp free-kick just outside the box, entrusting set-piece duties to Kabelo Dlamini, whose shot could not find a way past the wall.

Goalless is how things remained after the final whistle sounded, with the Buccaneers enduring a frustrating evening on home turf.