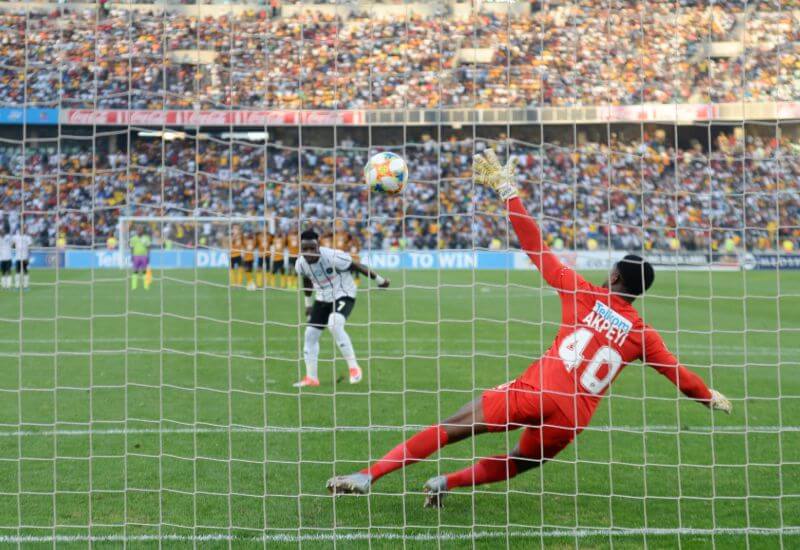 The penalty shootout proved to be Orlando Pirates' downfall at Moses Mabhida Stadium on Saturday, as they were knocked out of the Telkom Knockout in the quarterfinals by Kaizer Chiefs.

Despite the pain of defeat, the boys can hold their heads up high as they showed grit and determination to go toe to toe with a 11-man Amakhosi after the Buccaneers were reduced to 10 men following Mthokozisi Dube's red card in the second half.

The two Soweto Giants played to a two-all draw in regulation time, but two saves from Daniel Akpeyi would, in the end, prove to be the difference after 120 minutes.

This was after a hotly-contested Soweto Derby, which saw both sides not letting up in their pursuit for supremacy in South Africa's most watched fixture.

Going into the clash as somewhat the underdogs, the Buccaneers shook off the tag in the first half, with Fortune Makaringe bagging his first goal for the Club after Tshegofatso Mabasa had the presence of mind to lay the ball down in his path after some attention from the Chiefs' defence.

It was the worst start to the second half for Pirates, who lost a player to the Referee's book with loads of time remaining on the clock.

Dube had gotten himself booked earlier on, and his tackle on Khama Billiat earned him a second yellow card.

This called for resolute defence, and the Buccaneers were pushed back which called for desperate defending however Chiefs found an equaliser after persistent pressure courtesy of a goal from Leonardo Castro.

Ninety minutes ended with the two teams deadlocked at 1-1, and it was off to extra time.

Amakhosi were the first to get off the blocks the quickest, and desperate defence from the Buccaneers saw them concede a penalty early on after Abel Mabaso was adjudged to have handled in the box.

Defender Daniel Cardoso made no mistake from the penalty spot, giving his side the lead for the first time in the encounter.

However, the substitutes bench proved decisive for Pirates, who drew level through Gabadinho Mhango.

The Malawian's goal sent the game to penalties, and it's where the Sea Robbers faltered, failing to convert two of their spot-kicks to crash out of yet another cup competition.