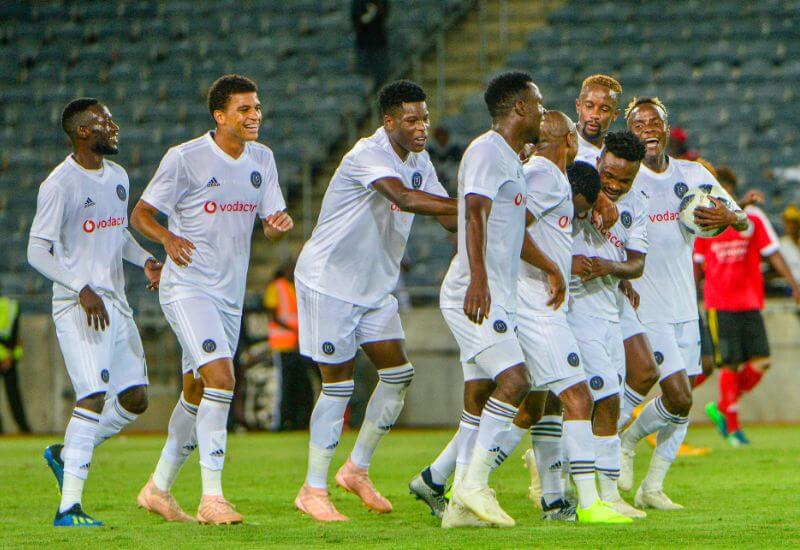 Orlando Pirates officially kicked off their CAF Champions League campaign in style as they stormed to a resounding 5-1 victory over Light Stars FC at the Orlando Stadium on Wednesday night.

The match started with the home side dominating play on all fronts. The first warning shot was fired three minutes into the game when Caio Marcelo forced a save from the Stars keeper with a goal-bound header.

Nine minutes later it was Thabo Qalinge who was released on goal by a deft touch from Meshack Maphangule but unfortunately Section’s attempt was thwarted by the onrushing keeper.

However, Stars silenced the partisan Bucs supporters in the 17th minute with the opening goal of the match, much against the run of play. A defence splitting pass from midfield released Stars’ striker Mario Ravo on goal and he maintained his composure to beat Jackson Mabokgwane.

The Orlando Stadium crowd came back to life again in the 25th minute with the home side netting the equaliser off the boot of Qalinge from close range.

Augustine Mulenga almost made it 2-1 seven minutes later with a splendid left footed strike on the edge of the box but unfortunately his shot struck the upright.

Pirates continued to press forward however and they were duly rewarded for their efforts in the 38th minute. The Zambian international would not be denied this time when a well worked move on the edge of the box involving Mahachi and Mntambo released Mulenga on goal and he easily slotted his shot into the back of the net.

Pirates scored another goal five minutes before the break via a Mpho Makola special. The 32-year old ensured the home side went into the break with a 3-1 lead with his well-taken free kick.

Goals seemed to dry up in the second half and at one stage it looked like the Stars defence would deny Mulenga and company any more chances to score.

However, in the 72nd minute, a brief lapse of concentration from the visitors allowed Mulenga to fashion a chance for Mntambo however the Orlando-born midfielder ballooned his shot over the bar with the keeper at his mercy.

The Mighty Buccaneers would finally find that crucial goal in the 92nd minute. This time from the boot of Justin Shonga with an equally splendid free kick of his own.

The final nail in the coffin came in the 94th minute with Mntambo released on goal by Qalinge; this time Mntambo fired his shot low and it snuck in at the near post.

That would prove to be the last real action of the game as the referee called time shortly afterwards.

Next up for the Buccaneers is a home league encounter against Maritzburg United on Saturday followed by a trip away to Seychelles on Monday.