Bucs Open MDC with a Win 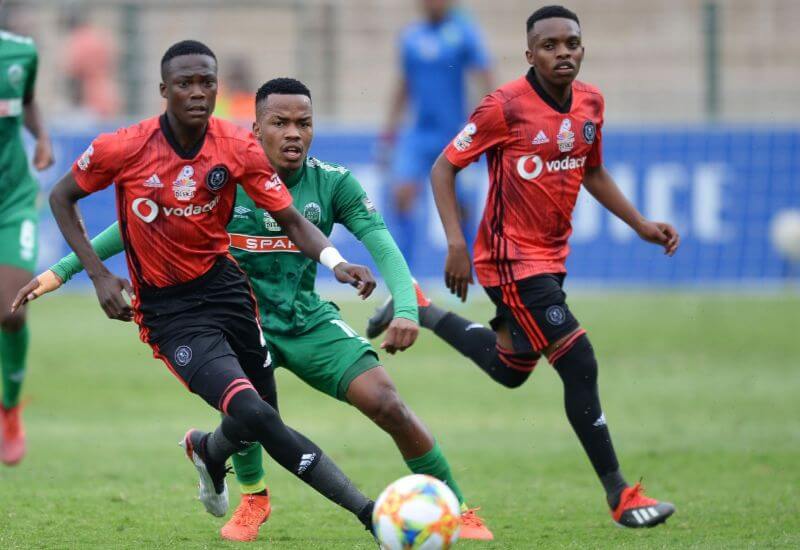 Orlando Pirates kicked off their Multichoice Diski Challenge (MDC) campaign with a 1-0 win over AmaZulu at the King Zwelithini Stadium on Friday afternoon.

The Buccaneers are looking to improve on what was a dismal outing in the competition last year where they finished well below the lofty expectations that they set themselves ahead of the season.

It was a sea of red attack from as early as the first minute when the visitors made their intention clear. Lehlohonolo Mofokeng was furthest forward after a marauding run, and was felled outside the box for an early freekick.

The Soweto Giants continued to press forward, winning setpieces in dangerous areas, and bringing goalkeeper Lethukuthula Hadebe into the action from early on.

Usuthu had moments of their own in attack, with Sanele Gaxa and Bayanda Ntshangase pulling the strings for the home side, while Lehlohonolo Sepeng and Katlego Madisha were menacing for the Bucs on the other end.

Despite threatening surges ahead from both sides, neither could make a breakthrough, with the 45-minute mark arriving with no disturbance to the scoresheet as both sides went into the break at 0-0.

The second half started much like the first, and this time there was to be no lengthy wait for the opener. In the 46th minute the Buccaneers were on the money through Smiso Bophela, who had been a workhorse throughout the contest.

Bophela timed his run to perfection as he joined the attack with the second wave. Debutant Lesiba Mahlong played a speculative ball across goal, which Hadebe could only palm into the path of Bophela, who smashed it home off the underside of the crossbar from distance.

Bophela could easily have turned provider for Pirates’ second just after the hour mark when he got onto the end of an accurate pass from Lethabo Mazibuko, to lay it on to Mahlong who skied his curled effort wide.

While the visitors were making things happen in attack, the defensive effort led by the skipper Lehlohonolo Mofokeng, kept the home side at bay. The youngster marshaled his troops with the class of a seasoned campaigner, bringing Katlego Ramonyai and Thabiso Sesane along with him, as they kept Kopano Thuntsane’s goal in tact.

The defence held out as Usuthu threw everything into attack as the clock wound down, and with the final whistle blowing, the Buccaneers took all three points from their season opener.

A good start for the ‘Next Gen Bucs’ as they signaled their MDC intentions from early on.