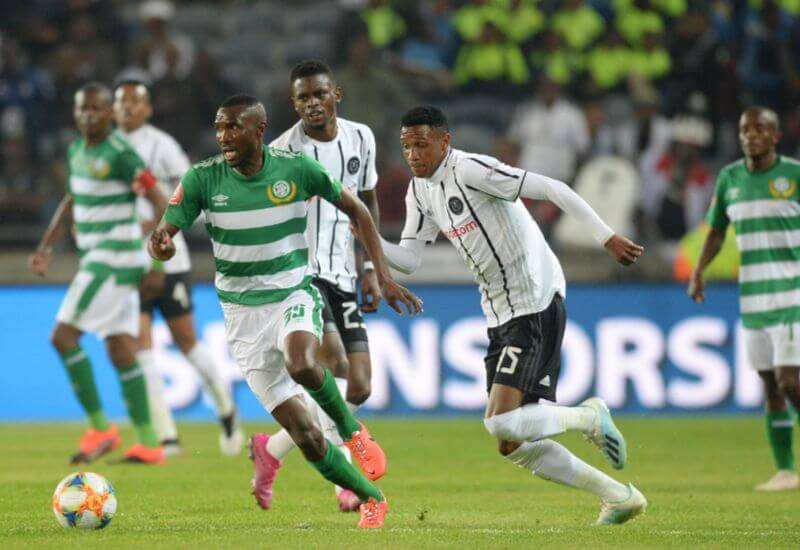 Orlando Pirates snapped a two-game winless streak against Bloemfontein Celtic in emphatic fashion with a 3-1 victory over their visitors in an ABSA Premiership match played at the Orlando Stadium on Saturday evening.

With the news of Thembinkosi Lorch and Mthokozisi Dube being absent due to injury, Micho Sredojevic handed a debuts to Thabiso Monyane and Kabelo Dlamini, with the latter coming off the bench as Phunya Sele Sele were brushed aside in the 2019/20 season opener.

The writing was on the wall from as early as the first minute when the Buccaneers were on the attack through Monyane, who’s run down the right saw him create space for the cross, which resulted in a corner for the Soweto Giants.

It wouldn’t take much time for the Bucs to race to an early lead after the Celtic defence was caught by an exquisite pass from Man of the Match, Musa Nyatama. The weighted delivery sent Augustine Mulenga clear on goal, with the Zambian hitman coolly slotting past the oncoming Sipho Chaine in the 6th minute of the game.

Siwelele struggled to penetrate Pirates’ rearguard for much of the first half, while putting in their own defensive shift to repel the marauding Buccaneers. Their efforts would pay dividends however as the match approached half time where the home defence were at odds in dealing with a bouncing ball. Mzwanele Mahashe capitalized on the indecision as he headed home while under pressure from two defenders and the goalkeeper in the 38th minute.

Both sides went into the half time break with the score level at 1-1.

The second half began much like the first, with Orlando Pirates on the front foot. The constantly high pressure attack would eventually take its toll on Celtic, who conceded a corner kick on the right. Mulenga would turn provider as his corner found Innocent Maela in space for a powerful header to make it 2-1 in the 55th minute.

Pirates continued to push for a third goal, bringing on the fresh legs of Kabelo Dlamini, who immediately put Celtic on the back foot. The move to extend the lead played into the hands of the visitors who were happy to soak up the pressure and catch the Bucs on the counter.

Wayne Sandilands was called on to make a finger tips save in the 74th minute after his defence allowed Ronald Pfumbidzai room in the box to fire at the far post. Celtic were certainly back in the game were it not for the last ditch effort from the keeper.

Buoyed by the energy of Pfumbidzai’s strike towards the goal where the passionate Celtic fans were gathered, it was Lucky Baloyi’s turn to combine with his attackers, to ask more questions of the Bucs defence as his shot fizzed wide of the target.

All the energy and buoyancy of Siwelele was quickly deflated when Gabadinho Mhango, Who was on the field for a matter of minutes, pounced onto Vincent Pule’s header, and score what would be classified as a poacher’s goal. Mhango showed good speed and reading of the game to put the defence under pressure, forcing a mistake in the 77th minute before winning the ball and smashing it past the stricken Chaine.

With time running out, Celtic threw everything into the attack, with former Buccaneers Menzi Masuku and Ndumiso Mabena leading the charge, only to find Sandilands and Alfred Ndengane closing up shop at the back.

The match finished 3-1 with the home side collecting maximum points in their opening league and home match.

Bucs through to group stages