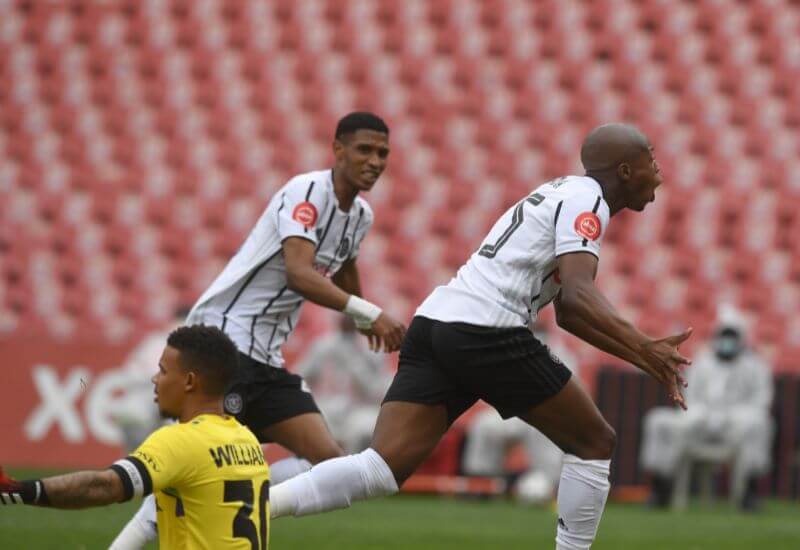 The Soweto Giants resumed their search for their first victory since the Absa Premiership restart against an in-form United side.

The hosts found themselves on the backfoot early on, with Matsatsansa threatening as early as the first minute with Sandilands denying Guily Manziba's strike.

Zinnbauer's men were presented with their first real opportunity of the match in the 20th minute through Gabadinho Mhango, who capitalised on a defensive error from Ditlhokwe, coming face-to-face with Ronwen Williams, however the Malawian international was denied his 15th league goal of the season by Williams who pulled off a great save.

The breakthrough would come on the other end of the first cooling break in spectacular fashion, as Vincent Pule unleashed a bullet from outside the box, after some neat interchange of passes by the Buccaneers, which gave Williams no chance.

United drew level just four minutes from the break after a succession of corners conceded by the Bucs. This time, Jamie Webber found a towering Luke Fleurs with his delivery, and the youngster turned the ball into the Pirates' goal.

The early stages of the second half were characterised by an enthralling battle between Sandilands and the in-form Bradley Grobler, with “Mfundisi” denying the Bafana marksman twice in open play.

The duel was interrupted by another moment of magic, this time from Zakhele Lepasa, who introduced himself in fine style with his first touch after being subbed in. The 23-year-old was on the end of a perfectly-timed pass from Thembinkosi Lorch, who had also provided the assist for the Pule goal.

Pirates survived a controversial call when a penalty was awarded in the 70th-minute after Innocent Maela clashed with Gamphani Lungu, with replays showing that contact was made outside the box.

This saw a resumption of the duel between Grobler and Sandilands, as the striker stepped up to take the penalty, but was denied by the veteran shot-stopper who stuck out a leg to keep the hosts in the lead.

Supersport got another opportunity from the spot with Ntsikelelo Nyauza deemed the culprit this time around, also earning a yellow card for his trouble.

Former Bucs' striker Thamsanqa Gabuza was the man to step up for the men in blue, but his shot was smothered by Sandilands, who dove to his left to make another save.

Game management was the name of the game in the final minutes, and the Buccaneers did well to hang on to their lead, which ensured a first win in the bio-bubble.