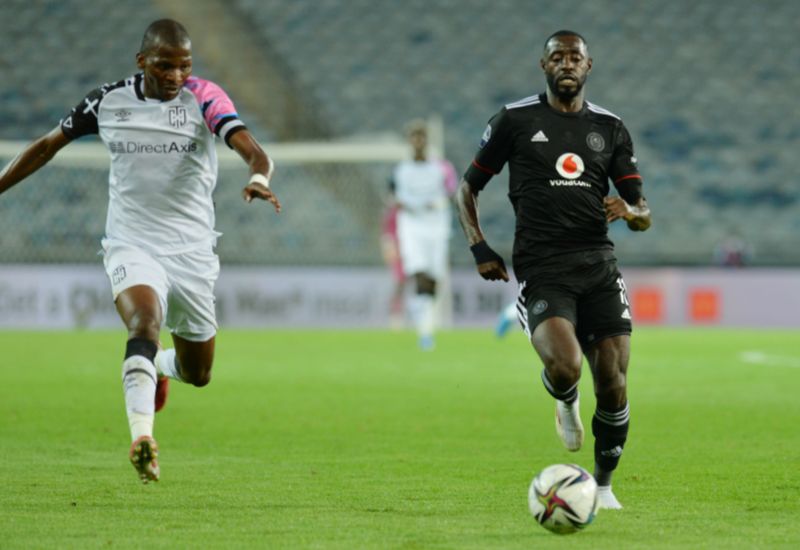 A dominant display at home proved not enough for Orlando Pirates, who were kept scoreless by Cape Town City as things ended 0-0 on their return to DStv Premiership action on Wednesday.

Back home after an emphatic away victory in continental cup action, the Buccaneers sought to make up lost ground in league football in what was their first Premiership game since mid-February.

They were quick off the blocks, creating a couple of chances in the opening exchanges, but without troubling the scorers.

The first of these opportunities came from Deon Hotto, who was located by a brilliant long ball from defender Olisa Ndah in the third minute before his half-volley towards goal sailed wide of the target.

The in-form Bandile Shandu came even closer to making an early breakthrough just a little over a minute later when he popped up at the edge of the box to unleash a powerful shot which was parried out of play by City keeper, Hugo Marques.

Pirates had one more opportunity inside the opening 10 minutes as Kabelo Dlamini threaded a well-weighted pass towards an onrushing Hotto, whose effort was blocked by the City shot-stopper.

The tempo throughout the majority of the opening half-hour was controlled by the hosts, who could have inched ahead right on the 30-minute mark through Shandu, who after some brilliant interplay with Kwame Peprah forced Marques to dive low and make another stop.

Some miscommunication at the back from the visitors could have handed the lead on a plate to the home side soon after when Dlamini found himself in possession of the ball on the left edge of the box, teeing it up for Thabang Monare, whose shot was well off target.

City had a strong finish to the first half as they drew saves from Bucs keeper Siyabonga Mpontshane, who had had a quiet afternoon up to that point.

The 35-year-old shot-stopper was positioned perfectly to hold on to a low shot from Taariq Fielies, and followed that up with an acrobatic effort to keep out a long-range effort from Thabo Nodada.

Having taken a breather at the break after a frantic first 45 minutes, Pirates looked re-energised after emerging from the tunnel and immediately started asking questions of their opponents.

Hotto began the second period as he started the first, getting on the end of a defence-splitting pass from Dlamini before hitting the side-netting from a tight angle in the 47th minute.

The Namibian international then looked to turn provider, floating a lovely ball towards Peprah who was unable to connect well enough with the cross.

Peprah continued to enjoy more touches early in the second half, popping up on the left flank where he did well to hang on to possession amid close attention from the defence before laying the ball to Fortune Makaringe, whose shot at goal was deflected out of play.

Three minutes from the hour-mark, City had a rare opportunity with Thamsanqa Mkhize pushing towards goal with purpose from the left, but for a well-timed intervention from Ndah, who halted the danger with a superb sliding tackle.

Clear chances dried up at both ends, and the Pirates dugout introduced some fresh legs inside the final 20 minutes, and that almost proved decisive with substitutes Terrence Dvzukamanja and Zakhele Lepasa almost combining for a late winner, only for the latter to be let down by a heavy first touch.

An overall frustrating evening for the Soweto Giants was confirmed when the referee blew his final whistle with things deadlocked at 0-0, as they played to a second consecutive league stalemate.