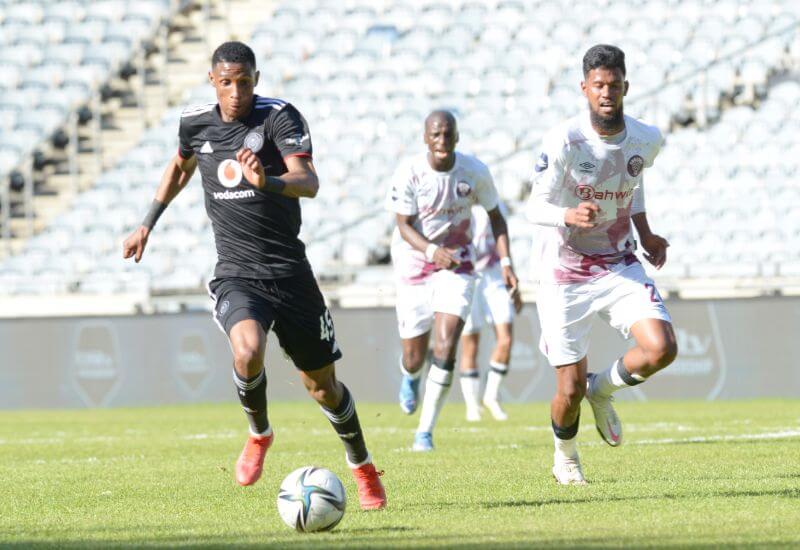 A second-half strike from Tshegofatso Mabasa proved to be the difference at Orlando Stadium, where Orlando Pirates ground out a 1-0 victory over fierce rivals Swallows FC on Saturday.

In what could be described as a grudge match following the hosts’ cup exit at the hands of their fellow Sowetans, three points was paramount on the day. This was after back-to-back draws by the home side in the two opening matches of their DStv Premiership campaign.

It was a nervy start to the encounter early on, with neither side managing to make a definitive incision inside the opposition’s half.

Vincent Pule got close in the 18th minute, freeing himself from a tight angle, but his shot was saved by Sanele Tshabalala.

The Bucs attacker continued to be a menace to the defence in the first half, and he could have opened the scoring on the stroke of half-time had he kept his shot from ballooning over the bar.

Pirates’ intent in the second half was clear from early on, with Kabelo Dlamini and Bandile Shandu both winning corners in the opening minutes as the men in black surged forward purposefully.

Pirates came within inches of scoring from one of those corner kicks.

After Dlamini’s initial cross was cleared, the Bucs midfielder headed the ball back into the box, only for Abel Mabaso to narrowly miss the glancing ball across goal.

The visitors were the first to make use of their substitutions in the 57th minute, with Brandon Truter opting to replace Bucs loanee Saleng and Solomons for Makgalwa and Ndlovu.

Two minutes later it was Pirates’ turn to ring the changes with Dlamini and Hotto making way for Dzvukamanja and Mabasa, as the hosts looked to take the lead and the move paid off.

The Buccaneers would storm ahead in the 78th minute, courtesy of a goal by Mabasa who rose highest in the box to meet a pin point cross from Pule.

The striker’s header was powerful enough to leave Tshabalala motionless, with the ball crashing into the back of the net.

In a tight affair, defensive reinforcements were brought in by the Bucs coaching staff, resulting in a debut for Olisa Ndah, who could have made an impact on the other end of the field with his volleyed effort, which went just wide of the target in the closing stages.

In the end Mabasa’s header, along with a solid defensive effort led by skipper and Man of the Match Happy Jele, was enough to hand the Buccaneers their first three-point haul of the season, bringing their tally to five points in their opening three outings.