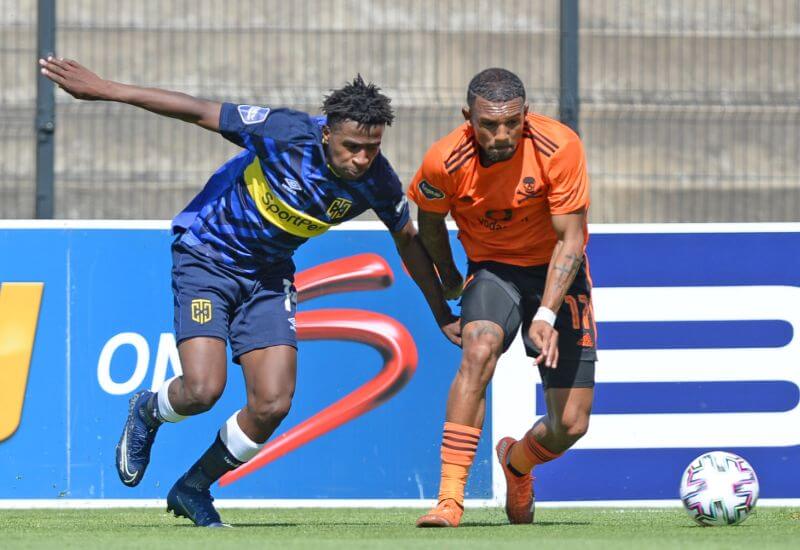 Orlando Pirates and Cape Town City played to a fourth two-all draw in as many years at Danie Craven Stadium on Saturday.

The Soweto Giants went to the clash in third place in the DStv Premiership standings, still yet to concede defeat, while their opponents were a point behind in sixth place.

A golden opportunity found Deon Hotto in a centre-forward position in the fifth minute, but the Namibian international angled his shot inches wide, with City keeper Peter Leeuwenburgh well beaten.

Almost immediately, the visitors were made to rue the missed opportunity, as Mduduzi Mdantsane curled in a pearler, which left Richard Ofori stunned, barely two minutes after the Buccaneers'  first chance.

While approaching the 20-minute mark, Pirates drew level through Vincent Pule, who snatched the rebound after Leeuwenburgh had blocked Hotto's shot at goal.

Back in the starting XI after missing out of the previous outing, the midfielder opened his account for the season from point-blank range, bringing the Soweto Giants on level-pegging.

Zakhele Lepasa could have made it 2-1 to the visitors, if not for a well-timed stop from City's Dutch shot-stopper, who stuck out a leg to keep the striker's point-blank effort out.

As was the case for the opening goal, the Buccaneers were made to pay for not converting their chances, as former Buc, Abbubaker Mobara wrong-footed Ofori to net a fine strike from long range in the 33rd minute.

It sent City into the break with their lead restored, with the visitors with all to do in the last 45 minutes.

Pirates' first chance early on in the second half fell to Terrence Dzvukamanja, who was brought on at halftime. The Zimbabwean international's shot rattled the crossbar, but could not find the target.

It would take until the 66th minute for the equaliser to come, through Pule, who completed his brace after being set up by Lepasa, who was one of the men in orange waiting in the City half after a fine counter-attack.

Chances continued to come for the Buccaneers, with second-half substitute Tshegofatso Mabasa in the thick of the action.

The 24-year-old was on hand to give Pirates the lead in the 76th minute, but his strike hit the outside of the far post to go out for the goal kick.

Well into injury time, he was in the thick of things again, with a shot from the edge of the box, which rolled just wide of the target.

Pirates' dominance in the closing stages did not provide the desired result, as they had to settle for a single point for the second Saturday in the running, with the game ending in another 2-2 draw between the two sides.