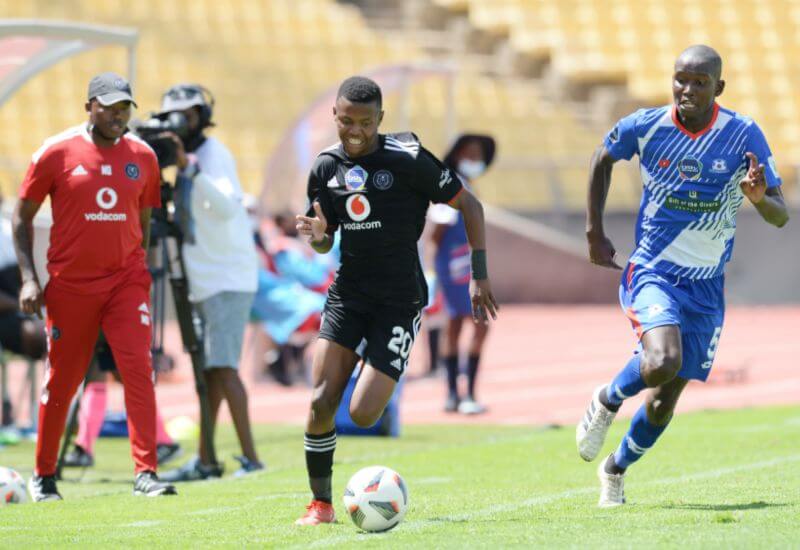 Orlando Pirates Reserves climbed to the top of the DSTV Diski Challenge standings with an emphatic 3-0 victory against Maritzburg United Reserves at Royal Bafokeng on Saturday.

Coach Mandla Qhogi stuck with the same XI that thumped Golden Arrows 4-1 in the previous fixture at Rand Stadium in a bid to build on the two straight victories earned ahead of Saturday’s clash.

Despite the confidence brought by the Buccaneers into the clash, the first 20 minutes passed by without much incident, as both sides were happy to knock the ball around.

Pirates keeper Elson Sithole was tested in the 24th minute, diving low to keep out a grass-cutting shot from Asanda Buthelezi.

It would take a magical moment to bring the game to life, with the in-form Mohau Nkota netting from a really tight angle down the right flank with a fine curling effort into the far post in the 36th minute.

Barely a minute later, Pirates were two-up with Nkota playing the role of the provider this time around as he pounced on a defensive error to lay the ball to Boitumelo Radiopane, who calmly finished for his third of the season.

The two-goal lead allowed the Soweto Giants to control the tempo of the game, and they were happy to go into the tunnel with some distance between them and their opponents.

Much like the first, the second half began as a scrappy affair with neither side making real headway into the other’s territory.

Pirates could have gone 3-0 up I n the 53rd minute when captain Thabiso Monyane sent the ball crashing into the crossbar before Nkota collected the rebound and was unable to the ball into the back of the net.

Ashley Wyngaardt threatened at the other end, but also could not find the target as he sent the ball wide in what was the KwaZulu-Natal outfit’s best chance of the half.

The ever-lively Nkota was both the catalyst and the finisher for the next goal, winning a free-kick which he finished off after Monyane struck the crossbar, with the ball falling kindly for the Bucs’ number 20 who grabbed his second of the afternoon in the 78th minute.

Maritzburg were desperate to come away with something from the fixture, and Wyngaardt again surged forward before forcing a save off Sithole.

With a three-goal advantage, the young Buccaneers comfortably marched to another victory as they leapfrogged Mamelodi Sundowns into top spot with more fixtures scheduled for Sunday.