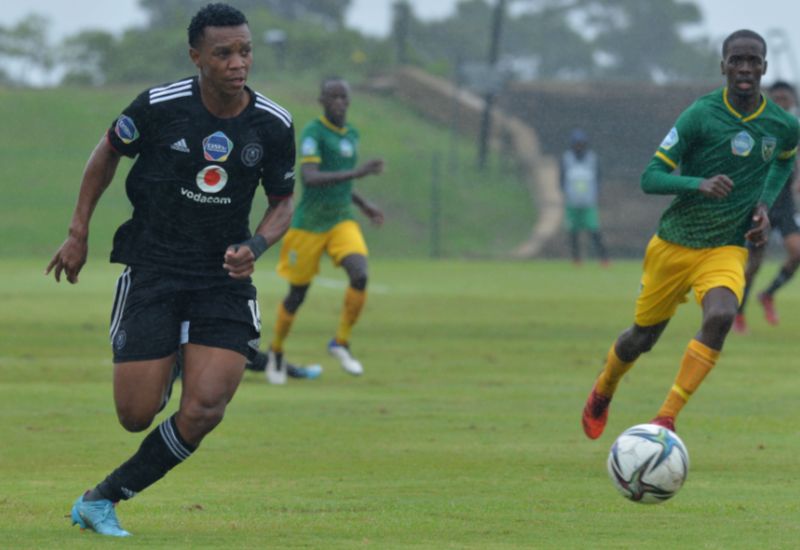 Orlando Pirates Reserves were held to a 2-2 draw by a 10-man Golden Arrows in their DStv Diski Challenge fixture at Princess Magogo Stadium on Saturday.

Following a string of poor results, the Bucs Reserves had relinquished their stronghold on top spot, and went in search of a maximum-points haul to avoid further setbacks in their challenge for the title.

In rainy conditions, the visitors had some promising moments on attack, with Thabiso Monyane especially busy on the right flank.

Returning to the starting lineup after sitting out the last fixture, the Bucs skipper was initially thwarted by the high line held by the home side on defence. This was before he was able to pair up the competition’s leading goal-scorer, who was freed up for a shot from range, only to narrowly miss the target right before the half-hour mark.

While it was far from one-way traffic in favour of the Buccaneers, they were stunned at the other end just moments from the break when Abafana Bes’thende took the lead in the 39th minute.

Still trailing as they emerged from the tunnel, Pirates drew level just three minutes after the restart when Boitumelo Radiopane bagged his 19th of the season.

The visitors continued to push ahead, but without much success, until a clumsy challenge from Kwanele Msomi on Radiopane allowed them another opportunity from the spot.

The Arrows man was given his marching orders, and it was the competition’s leading goal-scorer who stepped up, and he made no error in adding to his tally, drawing the Bucs Reserves ahead for the first time in the contest.

With rain falling heavily, both sides searched for the ascendancy, but the conditions made it hard to make proper headway on both ends.

This was until injury time when the hosts hit back against the run of play to steal a point from the encounter.

The result ensured that Pirates Reserves are without a win in their last five outings, with just as many games remaining until the end of the season.