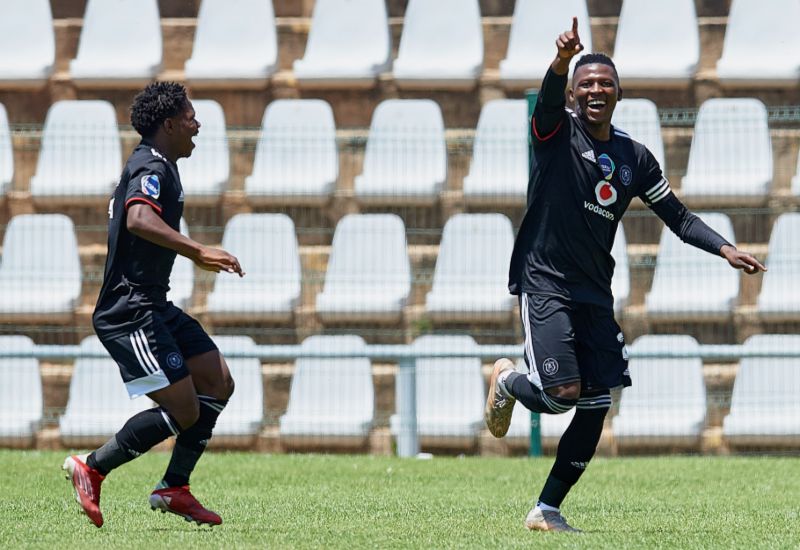 Orlando Pirates Reserves returned to winning ways with a crucial 2-0 victory over Cape Town City at Rand Stadium on Saturday to cling on to their spot at the top of the DStv Diski Challenge standings.

Having collected slim pickings across two games on the road, the Bucs Reserves were desperate to bounce back as the gap between themselves and second-placed Stellenbosch FC had narrowed down to a single point.

It didn't take them long to start rectifying the errors of the previous week, with the unlikely figure of defender Cassius Spandiel penning his name on the scoresheet by tapping in after a goalmouth scramble.

City sought to hit back from a set-piece soon after, but that only brought out the best of Pirates keeper Elson Sithole, who dived low to his right to keep out a well-struck shot in the 12th minute.

The competition’s leading goal-scorer Boitumelo Radiopane could have added to his tally for the season seven minutes later when he went for goal from a long way out, but his curling effort went just wide of the upright.

City’s pursuit for the equaliser found them camped inside Pirates territory midway into the first 45, but some assured defence from the hosts deprived them of any clear-cut chances at goal.

The next goal came from a dead-ball situation in the 38th minute when the Buccaneers were awarded a free-kick right on the edge of City’s penalty area.

Captain Thabiso Monyane stepped up to take the set-piece and made no mistake with a well-struck shot that doubled the Buccaneers’ lead.

Having created some distance between themselves and their opponents in the first 45, Pirates Reserves were made to defend early in the second half, and continued to not allow the visitors a sniff of opportunity.

It could have been 3-0 in the 73rd minute when substitute Siphamandla Mdunge received the ball on the right flank and cut inside before unleashing a powerful shot straight at the keeper, who kept it out for a corner.

There was a nervy moment at the other end as Sithole found himself in no-man’s land with City getting their best chance of the second half, but Spandiel was composed enough to make a crucial clearance off the line.

Despite boasting a healthy lead, the Buccaneers continued to search for goals, with Radipane and Andiswa Sithole both missing the target by mere inches towards the end of the encounter.

Pirates held on to their two-goal lead as the full-time whistle sounded, collecting an important victory that keeps them at the top of the table for another week.