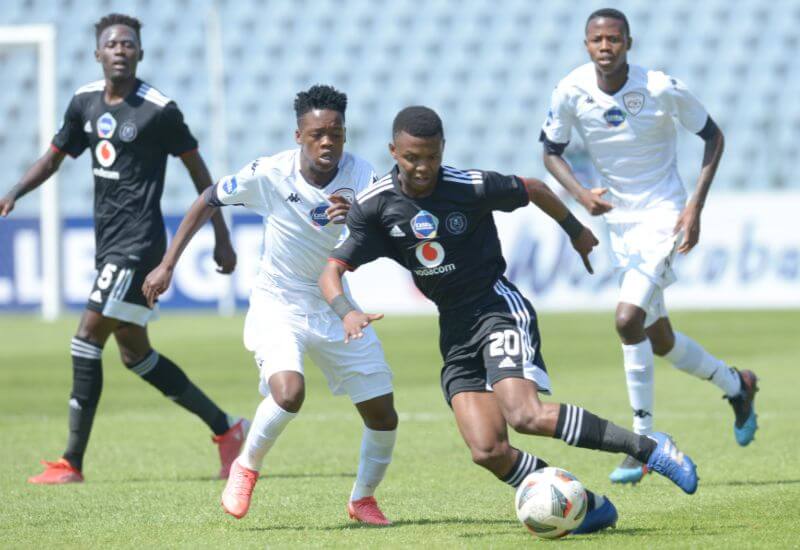 Both teams had begun their campaigns with defeat before bouncing back and securing victory last weekend.

They served up an entertaining first half with quality football at both ends, but that was not reflected on the scoreboard.

It was Sekhukhune who had the first real chance as early as the seventh minute, but that was thwarted by Bucs keeper Kopano Thuntsane, who made a fine save to keep out the danger.

Mohau Nkota, the hero from Pirates Reserves’ last outing, was an ever-present threat to the Sekhukhune defence, making good runs from both flanks and on more than one occasion tried to locate Boitumelo Radiopane who was keenly watched inside the box.

The Buccaneers had opportunities towards the half-hour mark, with Siphamandla Mdunge’s shot from range going just inches wide before Captain Neo Mumble had his header kept out by Rowan van Vuuren.

The half ended with both sides unable to capitalise from the chances they created.

A dream start to the second half greeted Pirates, who took just three minutes to make their mark.

The goal came through a moment of brilliance from Sonwabo Khumalo, who pounced on a loose ball with a first-time shot from outside the penalty area, leaving the defence stunned.

That strike seemed to calm the nerves, as the Buccaneers controlled the contest, not allowing their opponents chances at goal.

Meanwhile, they continued to push forward with Thabiso Monyane attempting to link with Radiopane on a few occasions, but the defence was alert enough to cut out those chances.

Khumalo could have made it 2-0 in the 70th minute when he popped up with another well-struck shot from outside the box, but Van Vuuren managed to make a fine save.

The Bucs Reserves continued to dominate towards the end, and defender Morapedi Ralenkoane had the last real opportunity of the game when he rose high to head towards goal, but send the ball over the bar.

It remained 1-0, with Pirates making it six points in their last two matches to hand their opponents their second defeat of the campaign.