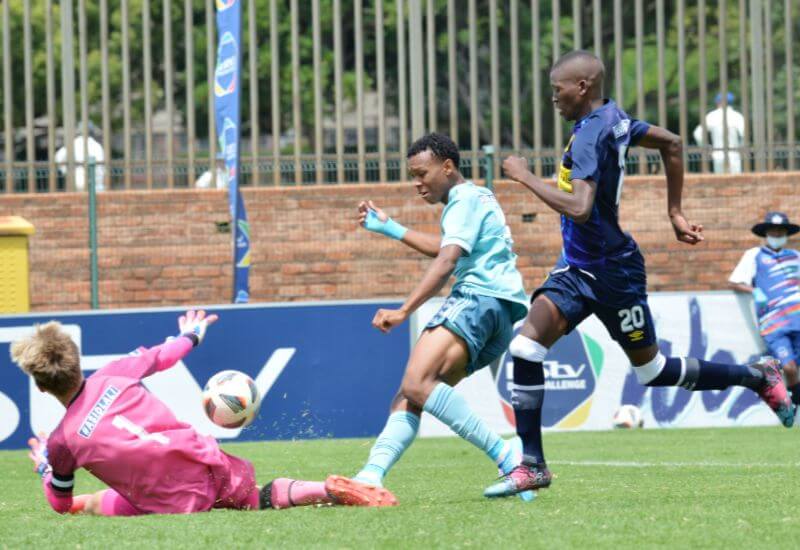 Orlando Pirates Reserves registered their first stalemate of their 2021/22 DStv Diski Challenge season as they were held to a goalless draw by Cape Town City at Bidvest Stadium on Sunday.

The two sides headed into the clash separated by 19 log points, with the Bucs Reserves still perched atop the standings after collecting 13 wins and three defeats in their 16 games.

An early corner presented the Soweto Giants a chance to take the lead just two minutes into the encounter when captain Thabiso Monyane’s delivery from the set piece found Mpumelelo Ndaba, who in turn whipped a cross towards Cassius Spandiel. However, the defender misdirected his header, missing the target by mere inches.

The lifeline seemed to have spurred City into action, as they enjoyed an elongated period of dominance in both possession and territory.

Pirates Reserves defence held firm initially, but was eventually breached in the 28th minute when Siphamandla Dondolo found a way past an outstretched Elson Sithole, but was denied by the upright.

At the other end, the Buccaneers gradually grew into the game, and could have taken the lead on the 36-minute mark as Monyane’s square ball across the face of goal found Boitumelo Radiopane, whose shot hit the crossbar from rather close range.

The prolific Bucs striker was on the end of another attack just seconds later, but a 17th goal of the season still eluded him, as he sent his shot over the bar this time around.

Next to fire a shot at goal was Mpumelelo Ndaba, whose attempted cross towards Radiopane was blocked before the ball fell kindly into his path, but the final shot was off target, leaving City off the hook once more.

The Capetonians set to capitalise from the let-off on the stroke of halftime, but Sithole ensured that Pirates did not trail as they headed into the tunnel by pulling off a brilliant save to stop a powerful shot from Dondolo.

The Buccaneers began the second half as they started the first, launching an early attack which ended as Radiopane got behind the defence before he was denied by the keeper in a one-on-one situation.

Kamogelo Seemela had the opportunity to edge Pirates ahead after a scramble inside City’s penalty area in the 52nd minute, but his attempt at goal was deflected out.

There was another close call just after the hour mark, when Morapedi Ralenkoane leapt high to head towards goal from a corner, but sent the ball wide.

Ten minutes from the full-time whistle, the woodwork came to the Buccaneers’ rescue once more, with the crossbar denying City from finding the opening goal.

Radiopane had two almost identical efforts in the final exchanges cleared from the line, as he found himself unmarked just inside the 18-yard area on both occasions.

In the end, it was a rare result for the Buccaneers, who continue to top the standings 17 games into the season.