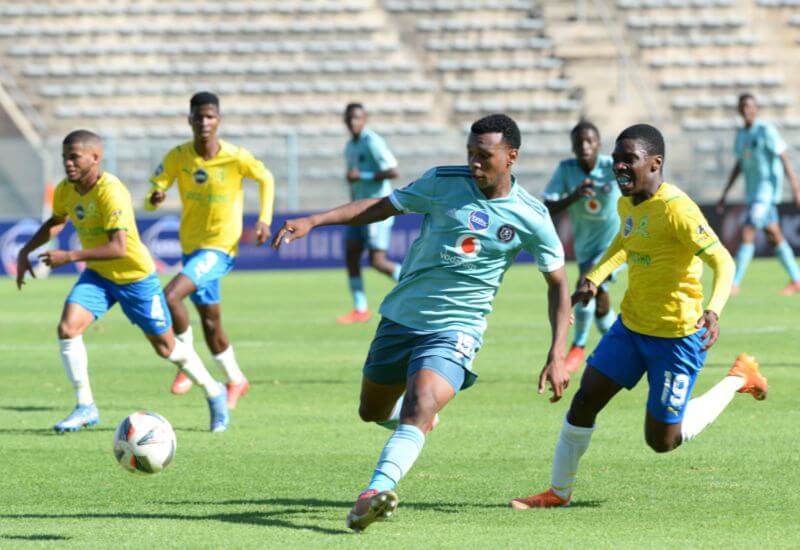 In the Bucs Reserves’ first fixture since November, Coach Mandla Qhogi was able to call upon the prolific goal-scoring pair of Mohau Nkota and Boitumelo Radiopane, who were both unavailable for selection ahead of the team’s most recent game.

The latter was first to get a shot at goal, and it was a rather tame one as he failed to connect firmly with a long ball from Captain Thabiso Monyane with just the keeper to beat.

He would however make amends as early as the 14th minute as he pounced on a misguided back pass before comfortably slotting into the back of the net to make it 1-0.

The visitors did not have to wait long for their second of the match, and it was Monyane who provided the strike after the home side cleared a threatening ball from a corner straight into his path, and the Bucs skipper made no mistake in extending his side’s advantage.

The tempo of the game dropped midway through the first half, but Pirates Reserves continued to control proceedings. This was until the half-hour mark, where Riandre Vries forced a save off Kopano Thuntsane, who was forced to dive low to his left to stop the ‘Downs attacker.

It took until the stroke of half time for the hosts to hit back, and it was through Vries, whose set-piece was deflected into the net by Pirates winger Simiso Bophela, wrong-footing Thuntsane.

Looking to restore their two-goal advantage, Pirates Reserves were quick off the blocks in the second half, and could have made it 3-1 two minutes after the restart when Njabulo Mndebele pushed forward into the box, only to send his shot wide.

There was action at the other end when Sundowns’ Kabelo Moagi pierced through the defence before his shot was blocked by Thuntsane, who stuck out a foot to keep his side in the lead.

Radiopane completed his brace in the 67th minute when he headed in from close range after some fine work down the right from second-half substitute Siphamandla Mdunge, who shook off a defender before releasing a cross towards the striker, who netted his ninth of the season.

The Buccaneers continued to maintain control of proceedings, but were stunned in the penultimate minute of regulation time when Moagi shot past Thuntsane to set up a tense finish.

It was then time for the visitors to cling on to their slim lead, which they almost extended through the unlikely figure of Kamogelo Seemela, whose shot struck the upright.

There were further chances for Mpumelelo Ndaba, who on more than one occasion headed just wide from the set-piece inside injury time.

The afternoon belonged to the Bucs Reserves in the end, as they kicked off the New Year in style, marching to a seventh consecutive victory.