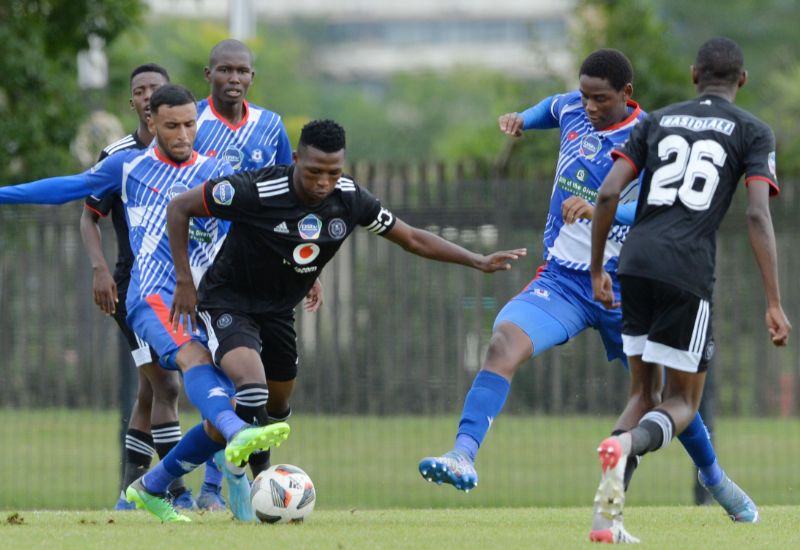 Reeling from the disappointment of a home defeat in their last outing, the Bucs Reserves sought to claim maximum points on the road in order to cling on to top spot in the standings.

They were met with a determined Maritzburg outfit, who were desperate to get out of the bottom half of the table.

Following an intense midfield battle in the opening exchanges, the Buccaneers utilised the counter in search of the opener, with Captain Thabiso Monyane and striker Boitumelo Radiopane both featuring prominently, but without making any inroads.

The breakthrough would come at the other end in the 26th minute when Maritzburg pushed forward with a counter of their own, with Kamvalethu Cele finishing past Kopano Thuntsane to make it 1-0.

Pirates were then made to toil as they went in search for the equaliser, with the home side’s high defensive line catching a few of the Bucs attackers offside.

Radiopane got close 37 minutes in when he was located by Monyane from a corner kick, only to be denied by Maritzburg goalkeeper Mcebisi Langa.

The Buccaneers striker however did not have to wait too long to get on the scoresheet, as he ran onto a pass from Sonwabo Khumalo before firing into the back of the net from long range to make it 1-1 two minutes from the break.

The second half saw the Buccaneers’ efforts quickly undone, with the home side netting twice before the hour-mark.

The first goal came through Asanda Buthelezi, who got on the end of another counter in the 50th minute, making it 2-1 before Cele completed his brace 10 minutes later, stretching his side further ahead with a well-taken free kick.

Pirates’ desperate pursuit for a way back into the game was not fruitful, with Maritzburg’s defence proving resilient.

Frustration showed in the Bucs camp when defender Neo Mumble was yellow carded for a push on an opponent towards the end of the contest.

The writing had been on the wall for a while, and another defeat for the Buccaneers was confirmed when the final whistle sounded, sealing a second straight loss.